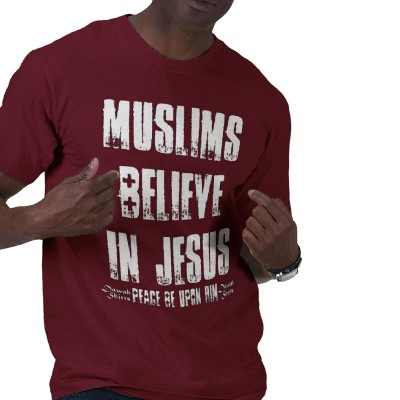 The Second Coming of Jesus

There are a large number of authentic sayings of Prophet Muhammad (peace and blessings of Allah be upon him) that clearly indicate the second coming of Jesus.

By the One in Whose hand is my self, definitely the son of Mariam will soon descend among you as a just judge, and he will break the cross, kill the pig and abolish the jizyah, and wealth will be so abundant that no one will accept it, until a single prostration will be better than the world and everything in it. (Al-Bukhari)

Jabir ibn `Abdullah said, "I heard the Prophet saying, 'A party of my nation will never stop fighting for the truth victoriously until the Day of Rising.' He said, 'Then Jesus son Mary (peace be upon him) will descend and their amir will say, "Come and lead us in prayer," but he will say, "No. Some of you are amirs over others," as Allah's showing honor to this nation.'" (Muslim)

A Follower of Muhammad

The above two hadiths show that according to Islam, Jesus will return to the earth as a follower of the final Prophet Muhammad. And at the second coming, it is inconceivable that Jesus will bring a new Law.

We should remember that the religion of Allah has been completed through the final Prophet, and so there is no question of another Law at all; so Jesus has got to follow the Law of Muhammad.

We know that some "Christians" do not follow Jesus. They follow St Paul and his version of the religion of Jesus. So one of the first duties of Jesus will be to bring the Christians back to the true religion he preached and practiced, namely submission to the One God.

Also, the Jews who are still waiting for the Messiah will be made to realize that the real Messiah was indeed Jesus and they need to recognize that fact, and follow the Messiah (Christ) Jesus.

When the Christians and the Jews follow Jesus, they will be Muslims. By the second coming of Jesus, the confusions regarding Jesus will disappear and we can imagine a situation where Jews, Christians and Muslims join together to pray behind Islam's prophet Jesus, or behind a Muslim Imam.

One important point to note in this connection is the correlation between the expectations about the coming of a prophet or messiah in all the three Abrahamic religions.

Jews expect the Mashiach (Messiah; literally "the Anointed One" ) as a political and military deliverer and king. The Christians believe the Messiah to be a divine incarnation and "savior",  who came to liberate the people from sin. And the Muslims believe the Messiah to be a sign to the world sent by God with a significant prophetic mission to the Children of Israel.

In all the three cases the word, Messiah (Arabic: Masih) is used for the expected prophet. Both Christians and Muslims believe Jesus to be the Messiah, while the Jews reject him and continue to expect the Messiah even now.

No one can deny the continuity of the same religious tradition through the three religions, though sectarianism has clouded the whole issue of common religious heritage.

One of the important links among the three religions ought to be the Messiah; especially as he serves as a link between Judaism and Islam. Because, he is the expected Messiah of the Jews, who clearly foretells to his followers of the coming of the Paracletos – the final Prophet.

Besides, he is properly described by Allah Almighty in the Qur'an as a "sign" to the world. But most people did not properly understand the sign and consequently misconstrued his mission.

As Jesus was a sign from Allah, there was an aura of wonder and mystery around him, which caused a lot of speculation among his followers after his time.

And there ought to be a way of clearing the cloud of mystery around Jesus before the end of the world. So Allah Almighty says in the Qur'an what means:

*{That they said in boast, "We killed Christ Jesus the son of Mary, the Apostle of Allah";- but they killed him not, nor crucified him, but so it was made to appear to them, and those who differ therein are full of doubts, with no certain knowledge, but only conjecture to follow, for of a surety they killed him not. Nay, Allah raised him up unto Himself; and Allah is Exalted in Power, Wise. And there is none of the People of the Book but must believe in him before his death; and on the Day of Judgment he will be a witness against them…}* (An-Nisaa' 4:157-159)

Indeed these verses have generated a lot of controversy about the implication of certain words. A few points are worthy of note here:

Referring to the doubts and confusion in the minds of the people (i.e. People of the Book) regarding "the death" and the "raising" of Jesus, Allah emphatically tells us that they did neither kill him nor crucify him;  but raised him up to Himself.

The verses quoted above clearly say that all the People of the Book will believe in Jesus before he dies. Obviously, "believe in him" indicates the right belief about Jesus, that is, that Jesus was a prophet of God preaching His Oneness.

We know that neither the present day Jews nor the present day Christians have this belief about Jesus. So the reference in the verse is obviously about future Jews and Christians who will be made to realize the truth about the Messiah and will have to accept that truth.

And in the above verse, we may note the expression "before he dies". This expression is attributed to People of the Book sometimes; i.e. in the sense of "before their death".

But this cannot be; if so it would mean that all the Jews and Christians who lived after Jesus' time would realize the truth of Jesus before their death till Judgment Day.This is most unlikely. Rather the correct meaning of the verse must be that Jesus, on his second coming will bring the Jews and the Christians of that future time, not only to the truth of himself, but also to the true religion.

A careful evaluation of all the points related to the matter would lead us to the conclusion that Islam teaches that Jesus will come again and he will not bring a new Law then; so he would follow the Law of Muhammad.