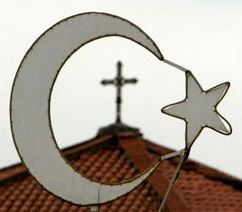 Some years ago, an agnostic friend of mine married a Jewish woman who practised her faith seriously. He took instruction in Judaism and seemed quite likely to convert - but eventually did not. His chief reason was that he remained agnostic. But there was another obstacle that surprised even himself: "I found that I just did not want to give up Jesus."

In European culture, there is no getting away from Jesus even if you are agnostic. True, Nietzsche tried to reject him with detestation and contempt, calling him an "idiot", a purveyor of a sick, decadent view of the world. Nietzsche thought that the only figure in the New Testament who commands respect is Pontius Pilate. Yet the very ferocity of Nietzsche's onslaught on Jesus showed how strong in his heart was the image he wanted to destroy.

Now, what if my friend had married a Muslim? The interesting thing is that he could have kept Jesus - not the Jesus who was the Son of God, admittedly, and who was crucified, but certainly the Jesus who was Messiah and miracle worker, who conversed regularly with God, who was born of a virgin and who ascended into heaven.

Jesus is referred to quite often in the Koran, six times under the title "Messiah". Yet I had long supposed that the importance of Jesus as prophet in Muslim tradition was not much more than a matter of lip-service, something to which Muslims gave (to use Cardinal Newman's distinction) "notional" rather than "real" assent.

This impression was strengthened when I went to Ur of the Chaldees in southern Iraq and visited the so-called house of Abraham. It is only a few piles of sun-baked mud bricks, but you would have expected hundreds of Muslim Arabs to be visiting the birth-place of their Patriarch. I saw none - whereas the shrines of Muslim martyrs in Najaf and Kerbala were thronged. I assumed, therefore, that Jesus must be a marginal figure in the Muslim world.

How wrong this assumption was I have learnt by reading a fascinating and instructive book, The Muslim Jesus, by the Cambridge academic Tarif Khalidi. Professor Khalidi has brought together, from a vast range of sources, most of the stories, sayings and traditions of Jesus that are to be found in Muslim piety from the earliest times.

The Muslim Jesus is an ascetic, a man of voluntary poverty, humility and long-suffering. He literally turns the other cheek, allowing his face to be slapped twice in order to protect two of his disciples. He teaches the return of good for evil: "Jesus used to say, 'Charity does not mean doing good to him who does good to you . . . Charity means that you should do good to him who does you harm.' " He loves the poor and embraces poverty: "The day Jesus was raised to heaven, he left behind nothing but a woollen garment, a slingshot and two sandals." He preaches against attachment to worldly things: "Jesus said, `He who seeks worldly things is like the man who drinks sea water: the more he drinks, the more thirsty he becomes, until it kills him.' "

Many of the sayings of the Muslim Jesus are clearly derived from Biblical sources - "Place your treasures in heaven, for the heart of man is where his treasure is"; "Look at the birds coming and going! They neither reap nor plough, and God provides for them." Sometimes there is a sort of gloss on words of Jesus from the Gospel: "Oh disciples, do not cast pearls before swine, for the swine can do nothing with them . . . wisdom is more precious than pearls and whoever rejects wisdom is worse than a swine."

He is certainly a wonder-worker. He often raises the dead, and gives his disciples power to do the same. More than once he comes across a skull and restores it to life, on one occasion granting salvation to a person who had been damned. The skulls, like everyone else in these stories, address Jesus as "Spirit of God". Once he is even addressed as "Word of God".

I once had a conversation with members of an Islamic organization in Beirut. One of them said this: "The greatness of Islam is that we combine Judaism and Christianity. Jesus freed enslaved hearts, he was able to release human feeling, to reveal a kingdom of peace. Jesus's realm was the realm of soul. Jesus is soul; Moses is mind, the mind of the legislator. In Islam, we interweave both."

This is certainly the Jesus of these stories - the Jesus of the mystical Sufi tradition. The great Muslim philosopher Al-Ghazali actually called Jesus "Prophet of the heart".

The Muslim Jesus is not divine, but a humble servant of God. He was not crucified - Islam insists that the story of the killing of Jesus is false. He is, as it were, Jesus as he might have been without St Paul or St Augustine or the Council of Nicaea. He is not the cold figure of English Unitarianism, and he is less grand than the exalted human of the Arians. As you read these stories, what comes across most powerfully is that the Muslim Jesus is intensely loved. There is an element of St Francis of Assisi.

It is good to be reminded, especially now, of the intimate connections there have been between Islam and Christianity, and how close in spirit Muslim and Christian piety can come to each other. Curiously enough, the Muslim Jesus, shorn of all claims of divinity, could be more easily held on to by my agnostic friend than the Second Person of the Holy Trinity.

One other thing: since Muslims deny the Crucifixion, their emphasis has been on the wonders surrounding the birth of "Jesus Son of Mary", born as his mother sat under a palm tree, and miraculously speaking from within the womb. There really is no reason why schools that put on Nativity plays, or anyone who wants to insist on the Christian meaning of Christmas, should fear that they may offend Muslim sensibilities, for Jesus really is shared by both faiths.

**John Casey is a fellow of Gonville and Caius, Cambridge