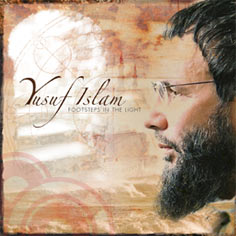 All I have to say is all what you know already, to confirm what you already know, the message of the Prophet (Sallallahu alaihi wa sallam) as given by God - the Religion of Truth.

As human beings we are given a consciousness and a duty that has placed us at the top of creation. Man is created to be God's deputy on earth, and it is important to realize the obligation to rid ourselves of all illusions and to make our lives a preparation for the next life. Anybody who misses this chance is not likely to be given another, to be brought back again and again, because it says in Qur'an Majeed that when man is brought to account, he will say, "O Lord, send us back and give us another chance." The Lord will say, "If I send you back you will do the same."

I was brought up in the modern world of all the luxury and the high life of show business. I was born in a Christian home, but we know that every child is born in his original nature - it is only his parents that turn him to this or that religion. I was given this religion (Christianity) and thought this way. I was taught that God exists, but there was no direct contact with God, so we had to make contact with Him through Jesus - he was in fact the door to God. This was more or less accepted by me, but I did not swallow it all.

I looked at some of the statues of Jesus; they were just stones with no life. And when they said that God is three, I was puzzled even more but could not argue. I more or less believed it, because I had to have respect for the faith of my parents.

Gradually I became alienated from this religious upbringing. I started making music. I wanted to be a big star. All those things I saw in the films and on the media took hold of me, and perhaps I thought this was my God, the goal of making money. I had an uncle who had a beautiful car. "Well," I said, "he has it made. He has a lot of money." The people around me influenced me to think that this was it; this world was their God.

I decided then that this was the life for me; to make a lot of money, have a 'great life.' Now my examples were the pop stars. I started making songs, but deep down I had a feeling for humanity, a feeling that if I became rich I would help the needy. (It says in the Qur'an, we make a promise, but when we make something, we want to hold onto it and become greedy.)

So what happened was that I became very famous. I was still a teenager, my name and photo were splashed in all the media. They made me larger than life, so I wanted to live larger than life and the only way to do that was to be intoxicated (with liquor and drugs).

After a year of financial success and 'high' living, I became very ill, contracted TB and had to be hospitalized. It was then that I started to think: What was to happen to me? Was I just a body, and my goal in life was merely to satisfy this body? I realized now that this calamity was a blessing given to me by Allah, a chance to open my eyes - "Why am I here? Why am I in bed?" - and I started looking for some of the answers. At that time there was great interest in the Eastern mysticism. I began reading, and the first thing I began to become aware of was death, and that the soul moves on; it does not stop. I felt I was taking the road to bliss and high accomplishment. I started meditating and even became a vegetarian. I now believed in 'peace and flower power,' and this was the general trend. But what I did believe in particular was that I was not just a body. This awareness came to me at the hospital.

One day when I was walking and I was caught in the rain, I began running to the shelter and then I realized, 'Wait a minute, my body is getting wet, my body is telling me I am getting wet.' This made me think of a saying that the body is like a donkey, and it has to be trained where it has to go. Otherwise, the donkey will lead you where it wants to go.

Then I realized I had a will, a God-given gift: follow the will of God. I was fascinated by the new terminology I was learning in the Eastern religion. By now I was fed up with Christianity. I started making music again and this time I started reflecting my own thoughts. I remember the lyric of one of my songs. It goes like this: "I wish I knew, I wish I knew what makes the Heaven, what makes the Hell. Do I get to know You in my bed or some dusty cell while others reach the big hotel?" and I knew I was on the Path.

I also wrote another song, "The Way to Find God Out." I became even more famous in the world of music. I really had a difficult time because I was getting rich and famous, and at the same time, I was sincerely searching for the Truth. Then I came to a stage where I decided that Buddhism is all right and noble, but I was not ready to leave the world. I was too attached to the world and was not prepared to become a monk and to isolate myself from society.

I tried Zen and Ching, numerology, tarot cards and astrology. I tried to look back into the Bible and could not find anything. At this time I did not know anything about Islam, and then, what I regarded as a miracle occurred. My brother had visited the mosque in Jerusalem and was greatly impressed that while on the one hand it throbbed with life (unlike the churches and synagogues which were empty), on the other hand, an atmosphere of peace and tranquility prevailed.

When he came to London he brought back a translation of the Qur'an, which he gave to me. He did not become a Muslim, but he felt something in this religion, and thought I might find something in it also.

And when I received the book, a guidance that would explain everything to me - who I was; what was the purpose of life; what was the reality and what would be the reality; and where I came from - I realized that this was the true religion; religion not in the sense the West understands it, not the type for only your old age. In the West, whoever wishes to embrace a religion and make it his only way of life is deemed a fanatic. I was not a fanatic, I was at first confused between the body and the soul. Then I realized that the body and soul are not apart and you don't have to go to the mountain to be religious. We must follow the will of God. Then we can rise higher than the angels. The first thing I wanted to do now was to be a Muslim.

I realized that everything belongs to God, that slumber does not overtake Him. He created everything. At this point I began to lose the pride in me, because hereto I had thought the reason I was here was because of my own greatness. But I realized that I did not create myself, and the whole purpose of my being here was to submit to the teaching that has been perfected by the religion we know as Al-Islam. At this point I started discovering my faith. I felt I was a Muslim. On reading the Qur'an, I now realized that all the Prophets sent by God brought the same message. Why then were the Jews and Christians different? I know now how the Jews did not accept Jesus as the Messiah and that they had changed His Word. Even the Christians misunderstand God's Word and called Jesus the son of God. Everything made so much sense. This is the beauty of the Qur'an; it asks you to reflect and reason, and not to worship the sun or moon but the One Who has created everything. The Qur'an asks man to reflect upon the sun and moon and God's creation in general. Do you realize how different the sun is from the moon? They are at varying distances from the earth, yet appear the same size to us; at times one seems to overlap the other.

Even when many of the astronauts go to space, they see the insignificant size of the earth and vastness of space. They become very religious, because they have seen the Signs of Allah.

When I read the Qur'an further, it talked about prayer, kindness and charity. I was not a Muslim yet, but I felt that the only answer for me was the Qur'an, and God had sent it to me, and I kept it a secret. But the Qur'an also speaks on different levels. I began to understand it on another level, where the Qur'an says,

"Those who believe do not take disbelievers for friends and the believers are brothers."

Thus at this point I wished to meet my Muslim brothers.

Then I decided to journey to Jerusalem (as my brother had done). At Jerusalem, I went to the mosque and sat down. A man asked me what I wanted. I told him I was a Muslim. He asked what was my name. I told him, "Stevens." He was confused. I then joined the prayer, though not so successfully. Back in London, I met a sister called Nafisa. I told her I wanted to embrace Islam and she directed me to the New Regent Mosque. This was in 1977, about one and a half years after I received the Qur'an. Now I realized that I must get rid of my pride, get rid of Iblis, and face one direction. So on a Friday, after Jummah' I went to the Imam and declared my faith (the Kalimah) at this hands. You have before you someone who had achieved fame and fortune. But guidance was something that eluded me, no matter how hard I tried, until I was shown the Qur'an. Now I realize I can get in direct contact with God, unlike Christianity or any other religion. As one Hindu lady told me, "You don't understand the Hindus. We believe in one God; we use these objects (idols) to merely concentrate." What she was saying was that in order to reach God, one has to create associates, that are idols for the purpose. But Islam removes all these barriers. The only thing that moves the believers from the disbelievers is the salat. This is the process of purification.

Finally I wish to say that everything I do is for the pleasure of Allah and pray that you gain some inspirations from my experiences. Furthermore, I would like to stress that I did not come into contact with any Muslim before I embraced Islam. I read the Qur'an first and realized that no person is perfect. Islam is perfect, and if we imitate the conduct of the Holy Prophet (Sallallahu alayhi wa sallam) we will be successful. May Allah give us guidance to follow the path of the ummah of Muhammad (Sallallahu alayhi wa sallam). Ameen!