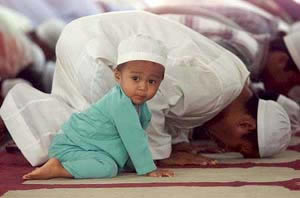 Prayer (Salah), in the sense of worship, is the second pillar of Islam. Prayer is obligatory and must be performed five times a day. These five times are dawn (Fajr), immediately after noon (Dhuhr), mid-afternoon ('Asr), sunset (Maghrib), and early night (Isha').

Ritual cleanliness and ablution are required before prayer, as are clean clothes and location, and the removal of shoes. One may pray individually or communally, at home, outside, virtually in any clean place, as well as in a mosque, though the latter is preferred. Special is the Friday noon prayer, called Jum'ah. It too, is obligatory and is to be done in a mosque, in congregation. It is accompanied by a sermon (Khutbah), and it replaces the normal Dhuhr prayer.

Because of the very definite procedures followed by Muslims during the prayer, including specified body movements, the straightforward English translation “prayer” is not usually considered adequate. The prayer has been variously called “the contact prayer”, “the obligatory prayer”, “the formal prayer”, and so on, but normal academic practice is now to refer to the prayer by its Arabic name ṣalāt.

Prayer: The Key to Good Life

Performing the prayer is a command of Allah. It is the most important pillar of Islam. It distinguishes between the believers and non-believers. Prayer is not an option; it is obligatory. It is not once or few times a week. But, it must be performed five times a day. All prophets of Almighty Allah merely told their people to pray; Islam, however, made it a very essential part of religion.

[Attend constantly to prayers and to the middle prayer, and stand up truly obedient to Allah.](Al-Baqarah 2:238)

[Perform the regular prayer at both ends of the day, and during parts of the night, for good things drive bad away; this is a reminder for those who are aware.](Hud 11:114)

The sincere and devoted prayer helps a person to enter the Paradise, and it is the key to everything good. In fact, the benefits of prayer are numerous, both in this world and the Hereafter; its benefits are spiritual, moral, physical, individual, and social.

Prayer is our link, our bond, and our communication with Allah. If you love Allah and want Him to love you, know that the prayer is the means to that. Prophet Muhammad (peace and blessings be upon him) said, "The source of my delight is the prayer" (authenticated by Al-Albani). He used to ask Bilal (may Allah be pleased with him) to give the Adhan for the prayer thus: "Give us comfort by it, O Bilal." He used to spend a long time in his nightly prayers. Sometimes, he used to offer prayer for one-third of the night and sometimes for half of the night, or even more than that. He used to find great comfort and joy in this heart-refining act of worship.

Performing prayer is rewarded both in this world and beyond. The whole structure of prayer is so beautiful and so remarkable that there is nothing comparable to it in any religion. Prayer is not just recitation or physical movements. Yet, mind, soul and body, all three are involved together in a most harmonious way during this obligatory act of worship.

Prayer is done both individually and collectively; it is done both in public and in privacy. If we observe our prayer as it should be observed, everything in our lives will change for the better. Our relationship with Allah will be good because we shall be living fully conscious of Him all the time. Our relations with our families, our co-workers, our neighbors, and everyone and everything will be very good.

Almighty Allah tells us in the Qur'an that the prayer precludes all kinds of evils, vulgarities, and indecencies,

[Recite that which has been revealed to you of the Book and keep up prayer; surely prayer keeps (one) away from indecency and evil, and certainly the remembrance of Allah is the greatest, and Allah knows what you do.] (Al-`Ankabut 29:45)

Moreover, we are told in the Qur'an that those who establish prayer regularly do not experience fears or anxieties when afflicted with hardships. Allah, the Most-High, says:

[Surely man is created of a hasty temperament, being greatly grieved when evil afflicts him, And niggardly when good befalls him, except those who pray,those who are constant at their prayer.](Al-Ma`arij 70:19-23)

More importantly, prayer brings about the true success in this life and in the life to come, as Almighty Allah tells us in the Qur'an,

[Successful indeed are the believers. Those who pray humbly … and who keep up their prayers, they shall be the heirs who shall inherit the Paradise and they shall be there forever.] (Al-Mu'minun 23:1-11)

Prayer requires taharah (Arabic for: cleanliness of one's body and clothes, and of the place of prayer). So, those who perform the prayer enjoy clean bodies, clean clothes, and a clean environment. In Addition, prayer is to be performed on appointed times. Consequently, the regular performers of prayer learn punctuality in all their affairs and get a sense of how valuable time is.

In prayer, Muslims stand together without any distinction of race, color, financial status, or political position. Those who perform prayer in congregation regularly do learn the concepts of equality, solidarity, and brotherhood. Prayer in congregation is performed behind an imam whom everyone has to follow. This teaches them discipline, order, and organization. Moreover, if the imam makes any mistake, any person can correct him. Indeed, this is a clear sign of democracy.

Let us pray regularly and pray in the best way, so that the benefits and beauty of prayer may reflect in our lives.

Mu`adh, one of the prophet's Companions, reported, "One day the Prophet took my hand and said, 'By Allah, I love you.' And said, 'I advise you, O Mu`adh, not to fail to say after every prayer the following: O Allah, help me to remember You, to thank You, and to worship You in the best way'"(An-Nawawi).