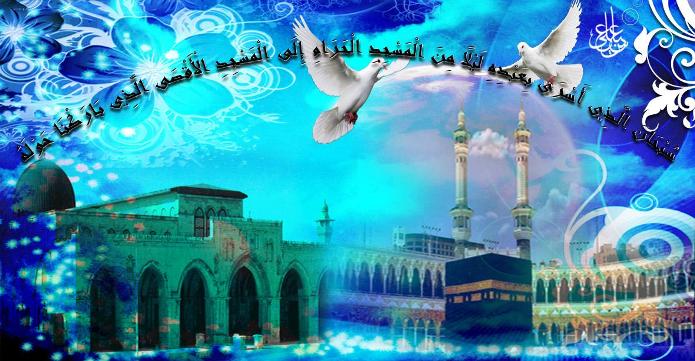 (The Miraculous Night Journey from Makkah to the Farthest Mosque in Jerusalem, and the Ascent through the Spheres of Heavens)

The last days of the Makkan phase of the Prophet’s life are noted for alternate fortunes ranging between two extremes: gradual success and continual persecution. However, glimpses of propitious lights were looming on the distant horizon, to ultimately materialize in the event of the Prophet’s Night Journey to Jerusalem and then Ascension through the spheres of the heavens.

As for its exact date, it is still controversial and no common consent has been reached. However, the majority of jurists is in favour of a date between 16-12 months prior to migration to Madinah. The following is a epitome of the details of that miraculous event narrated on the authority of Ibn Al-Qayyim.[Za'd Al-Ma'ad 2/49; Tareekh-e-Islam 1/124; Rahmat-al-lil'alameen 1/76]

The Messenger of Allâh [pbuh] was carried in body from the Sacred Mosque in Makkah to the Distant Mosque in Jerusalem on a horse called Al-Buraq in the company of Gabriel, the archangel. There he alighted, tethered the horse to a ring in the gate of the Mosque and led the Prophets in prayer. After that Gabriel took him to the heavens on the same horse. When they reached the first heaven Gabriel asked the guardian angel to open the door of heaven. It was opened and he saw Adam, the progenitor of mankind. The Prophet [pbuh] saluted him and the other welcomed him and expressed his faith in Muhammad’s Prophethood. He saw the souls of martyrs on his right and those of the wretched on his left.

There is however some difference as regards the issue whether the Prophet saw Allâh with his physical eye or not. Some interpreters say that seeing Allâh with his naked eyes was not confirmed. Ibn ‘Abbas, on the other hand, says that the word Ru’ya as used in the Noble Qur’ân signifies the observation with the help of the eye.

In Sûrah An–Najm (Chapter —The Star) we read:

Here (he) refers to archangel Gabriel, and this context is completely different from that in the Prophetic tradition of Isra’ and Mi‘raj, where ‘the approach’ relates to that of the Lord, Glory is to Him.

Some significant suggestive incidents featured the ‘Night Journey’ of the Prophet, of which we could mention:

The disbelievers, however, found it a suitable opportunity to jeer at the Muslims and their creed. They pestered the Prophet [pbuh] with questions as to the description of the Mosque at Jerusalem, where he had never gone before and, to the astonishment of many, the Prophet’s replies furnished the most accurate information about that city. He supplied them with all the news about their caravans and the routes of their camels. However, all this increased in them nothing but flight from the Truth, and they accepted nothing but disbelief.

For the true Muslims, however there was nothing unusual about the Night Journey. The All-Mighty Allâh, Who is Powerful enough to have created the heavens and the earth by an act of His Will, is surely Powerful enough to take His Messenger beyond the heavens and show him those signs of His at firsthand which are inaccessible to man otherwise. The disbelievers on their part went to see Abu Bakr on account of this event, and he readily said: "Yes, I do verify it." It was on this occasion that he earned the title of As-Siddiq (the verifier of the truth). [Ibn Hisham 1/399]

The most eloquent and most concise justification of this ‘Journey’ is expressed in Allâh’s Words:

The Divine rules as regards the Prophets goes as follows:

"Thus did We show Abraham the kingdom of the heavens and the earth that he be one of those who have Faith with certainty." [Al-Qur'an 6:75]

To Moses, his Lord said:

"He be of those who have Faith with certainty."

The Prophets, after seeing Allâh’s Signs, will establish their Faith on solid certainty too immune to be parted with. They are in fact eligible for this Divine privilege because they are the ones who will bear burdens too heavy for other ordinary people to carry, and in the process of their mission, they will regard all worldly ordeals and agonies too small to care about.

There are simple facts that emanate from this blessed Journey, and flow along into the flowery garden of the Prophetic biography; peace and blessings of Allâh be upon its author, Muhammad. The story of ‘the Night Journey’ as we see in the Noble Qur’ân is epitomised in the first verse of the Sûrah Isra’(Chapter 17 — The Journey by Night) then there is a quick shift to uncover the shameful deeds and crimes of the Jews, followed by an admonition saying that the Qur’ân guides to that which is most just and right. This arrangement is not in fact a mere coincidence. Jerusalem was the first scene of the Night Journey, and here lies the message directed to the Jews and which explicitly suggested that they would be discharged of the office of leadership of mankind due to the crimes they had perpetrated and which no longer justified their occupation of that office. The message suggested explicitly that the office of leadership would be reinstituted by the Messenger of Allâh [pbuh] to hold in his hand both headquarters of the Abrahamic Faith, the Holy Sanctuary in Makkah and the Farthest Mosque in Jerusalem. It was high time for the spiritual authority to be transferred from a nation whose history got pregnant with treachery, covenant-breaching and aggression to another nation blessed with piety, and dutifulness to Allâh, with a Messenger who enjoys the privilege of the Qur’ânic Revelation, which leads to that which is best and right.

There, however, remains a crucial question waiting to be answered: How could this foreseen transition of authority be effected while the champion himself (Muhammad) was left deserted and forsaken stumbling in the hillocks of Makkah? This question per se uncovered the secrets of another issue which referred to a phase of the Islamic Call and the appearance of another role it was about to take up, different in its course and noble in its approaches. The forerunners of that new task took the shape of Qur’ânic verses smacking of direct and unequivocal warning accompanied by a severe ultimatum directed to the polytheists and their agents:

"And when We decide to destroy a town (population), We (first) send a definite order (to obey Allâh and be righteous) to those among them [ or We (first) increase in number those of its population] who are given the good things of this life. Then, they transgress therein, and thus the word (of torment) is justified against it (them). Then We destroy it with complete destruction. And how many generations (past nations) have We destroyed after Noah! And Sufficient is your Lord as an All-Knower and All-Beholder of the sins of His slaves." [Al-Qur'an 17:16, 17]

Together with these verses, there were others revealed to show the Muslims the rules and items of the civilization upon which they could erect their Muslim community, and foreshadowing their ownership of a piece of land, exercising full freedom over it and establishing a coherent society around whose axis the whole humanity would rotate. Those verses in reality implied better prospects for the Prophet [pbuh] comprising a secure shelter to settle in, and headquarters safe enough to empower and embolden him to communicate his Message to all the world at large; that was in fact the inner secret of that blessed journey. For this very wisdom and the like we deem it appropriate to suggest that ‘the Night Journey’ took place either before the First Pledge of ‘Aqabah or between the two; after all, Allâh knows best.