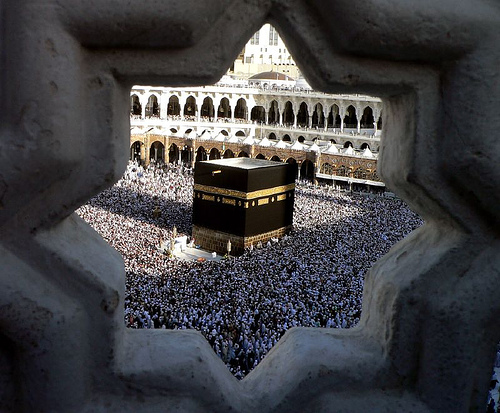 Verily, the praise belongs to Allah, the Most High, and may the Blessings of Allah and Peace be upon His Prophet Muhammad and his family and companions, all of them. It is narrated from Ibn Abbaas (RAA) that the Prophet (PBUH) of said:

"There are no days in which righteous deeds done in them are more beloved to Allah than these days, ie the ten days (of Zul-Hijjah). They said: O Messenger of Allah, not even Jihaad in the path of Allah? He said: Not even Jihaad in the Path of Allah, the Most High, except if a man goes out (for Jihaad) with his self and his wealth, then he doesn't return with anything from that."
(Al-Bukhaaree, Abu Daawood and others. The exact wording is that of Abu Daawood)

It is narrated from Ibn Umar that the Prophet Muhammad (Blessings of Allah and Peace be upon him) said:

"There aren't any days greater, nor any days in which deeds done in them are more beloved to Allah, the Most High, than these ten days (of Zul-Hijjah). So, increase in them the saying of Tahleel (La Ilaaha illa Allah), and Takbeer (Allah Akbar) and Tahmeed (al-Hamdu li-llah)" [Musnad Imaam Ahmad]

The Types of Deeds in These Ten Days:

First: The performance of Haj and Umrah, and these are the best of deeds that may be done. And what indicates their superiority are a number of Ahaadith, one of which is the saying of the Prophet (PBUH).

Performance of Umrah is an expiation of the sins committed between it and the previous Umrah, and the reward of the Haj which is accepted by Allah, the Most High, is nothing but Paradise. (Al-Bukhaaree and Muslim)

Second: Fasting during these days - as many of them as may be easy (for one to fast); especially the Day of Arafah. There is no doubt that the act of fasting is one of the best deeds, and it is from what Allah, the Most High, has chosen for himself, as in the Hadith Qudsee: Fasting is for Me, and it is I who give reward for it. Verily, someone gives up his sexual passion, his food and his drink for My sake..." (Al-Bukhaaree, Muslim, Maalik, at-Tirmidhee, Nasaa'ee and Ibn Maajah)

Also, from Abu Sa'eed al-Khudree who said that the Messenger of Allah said: No servant (of Allah, the Most High) fasts one day in the Path of Allah, except that Allah, the Most High, removes his face from the Fire because of it (the distance of travelling) seventy years. (Al-Bukhaaree and Muslim)

From Abu Qatadah that the Prophet said: Fasting the Day of Arafah will be credited with Allah by forgiving one's sins of the previous year and the following year. (Muslim)

Third: At-Takbeer (Allah Akbar) and adh-Dhikr (the remembrance of Allah through different words of praise and glorification) in these (ten) days, Allah said "And mention the name of Allah on the appointed days"(12:28).

This has been explained (by some) to mean the ten days (of Zul-Hijjah), and the scholars consider it desirable to increase adh-Dhikr in these days, based upon the hadith of Ibn Umar narrated by Ahmad, which contains the words:

... so increase in these days the Tahleel and Takbeer and Tahmeed...

It is reported about Ibn Umar and Abu Hurairah that: the two of them used to go out to the market place during the ten days (of Zul-Hijjah) saying: Allahu Akbar, causing the people also to say it. (Al-Bukhaaree)

Ishaaq narrates from the scholars of the Taabi'een that in these ten days they used to say:

It is a beloved act to raise the voice when saying the Takbeer in the markets, the houses, the streets, the Masjids and other places, because of the saying of Allah, the Most High, in Surah al-Hajj, verse 37: "... that you may magnify Allah for His Guidance to you"

The saying of Takbeer in congregation, ie everyone pronouncing the Takbeer with one voice, is not permissible since this has not been transmitted (to us) from the early generations of the Sahabah and those who followed their ways. Verily, the Sunnah is for everyone to say the Takbeer individually. And this is (generally) applicable to Dhikr and supplications, except if the person doesn't know what to say. In that case he may repeat after someone else until he learns (the words to be said). It is also permissible to make Dhikr with all the different wording of Takbeer and Tahmeed and Tasbeeh, and the rest of the Islamic legislated supplications (from the Qur'an and Sunnah).

Fourth: At-Tawbah (repentance) and abstaining from disobedience and all types of sins, since forgiveneand mercyare the results of deeds. Disobedience is the cause of being far away (from Allah, the Most High) and repulsion, while obedience is the cause of being near (to Allah, Most High) and His love. In the hadith of Abu Hurairah he said that the Prophet said: Verily Allah has a sense of Ghaira, and Allah's sense of ghaira is provoked when a person does that which Allah has prohibited. (Al-Bukhaaree and Muslim)

Fifth: Doing plenty of voluntary (nafl) righteous deeds of worship like Prayer, Charity, Jihaad, reading the Qur'an, Commanding what is Good and Forbidding what is Evil, and other such deeds.

Verily, these are amongst the deeds that are multiplied in these days. It is during these days that even deeds that are less preferred, are superior and more beloved to Allah than superior deeds done at other times. (These deeds are superior) even to al-Jihaad - which is one of the most superior of all deeds - except in the case of one whose horse is killed and his blood is spilled (loss of life in Jihaad).

Sixth: It is legislated in these days to make at-Takbeer al-Mutlaq at all times of night and day until the time of the Eid Prayer. Also, at-Takbeer al-Muqayyad is legislated, and it is done after the (five) obligatory prayers that are performed in congregation. This begins from Dawn (Fajr) on the Day of Arafah (the 9th of Zul-Hijjah) for those not performing Haj, and from Noon (Zhur) on the Day of Sacrifice (10th of Zul-Hijjah) for those performing Haj (pilgrims); and it continues until Asr prayer on the last day of the days of Tash-reeq (13th of Zul-Hijjah).

Seventh: The slaughtering of a sacrificial animal (Adhiyah) is also legislated for the Day of Sacrifice (10th) and the Days of Tashreeq (11th, 12th and 13th). This is the Sunnah of our father Ibraaheem - when Allah, the Most High, redeemed Ibraaheem's son by the great sacrifice (of an animal in his place). It is authentically reported that The Prophet Muhammad slaughtered (sacrificed) two horned rams, black and white in colour, and said Takbeer (Allahu Akbar), and placed his foot on their sides (while slaughtering them). (Al-Bukhaaree and Muslim)

Eighth: Offering animal as Udhyia It has been narrated from Umm Salamah (may Allah be pleased with her) that the Prophet said: If you see the Hilal (new moon) of Zul-Hijjah, and any one of you wants to make a sacrifice, then he should not cut (anything) from his hair and his nails. (Muslim and others) . And in one narration, he said: .Then he should not cut (anything) from his hair, nor from his nails, until he performs the sacrifice. Perhaps this is because of the similarity with the one who is bringing a sacrificial animal for slaughter (in Haj). As Allah, the Most High, said: And do not shave your heads until the Hady (sacrifice) reaches the place of sacrifice...

The apparent meaning of this prohibition is that it is particularly for the one whom the sacrifice is for, and does not include the wife or children, unless there is an individual sacrifice for one of them. There is no harm in washing the head, or scratching it, even if hairs may fall out.

Ninth: It is incumbent for the Muslim (who is not performing Haj) to make every effort to perform the Eid Prayer wherever it is performed, and to be present for the Khutbah and benefit.

He must know the wisdom behind the legislation of this Eid (celebration). It is a day of thankfulness and performing deeds of righteousness. So, he must not make it a day of wildness, pride and vanity. He should not make it a season for disobedience and increase in the forbidden things like music and singing, uncontrolled amusement, intoxicants and the like - those things which could cause the cancellation of the good deeds done in these days (of Zul-Hijjah).

Tenth: After what has been mentioned, it is fitting that every Muslim, male and female, take advantage of these days by obeying Allah, the Most High, remembering Him, thanking Him, fulfilling all the obligatory duties, and staying far away from the prohibited things. He must take full advantage of this season, and the open display of Allah's gifts, to attain the pleasure of his Lord.

Ghaira: A sense of honour and prestige, and the anger caused by its being violated.
At-Takbeer al-Mutlaq: the Takbeer (Allahu Akbar) which is unrestricted to specific times or any specific form.
At-Takbeer al-Muqayyad: The Takbeer which is done at a particular time and in a specific manner.