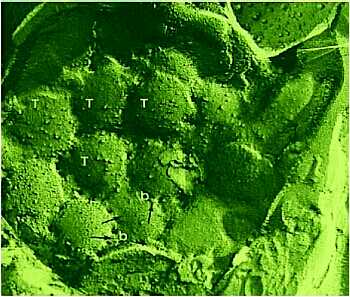 Allah (SWT) ordained that plants, people and animals receive their food from what plants produce in their green factories.

These green factories are built up by the plant at the beginning of its growth and are called by botanists “Chloroplasts” which contain the chlorophyll, which the Qur’an calls “Al-Khadir” (green substance), where the plant utilizes the light energy and changes it into chemical energy leading ultimately to the production of various kinds of grain, fruit and other parts of vegetation that we see in gardens and fields.

The Qur’an draws our attention to these facts in the Saying of Allah (SWT):

“It is He who sends down water (rain) from the sky. With it We produce vegetation of all kinds from which (water or plants) We produce green substance (Khadir), out of which We produce grain in clusters. And out of date palms, from their spathes come forth clusters of dates hanging low and near, and (We produce) gardens of grapes, olives and pomegranates, each similar (in leaves or shape), yet different (in fruit and taste). Look at (and think over) their fruits when they begin to bear fruit, and (look at) the ripeness thereof. Behold! In these things there are Signs for people who believe.” (Quran 6: 99)

Yet this fact was not uncovered to people till 1600 AD, after 300 years of research, when botanists carried out numerous researches and experiments in the field of botanical physiology to understand the process of photosynthesis.

In 1804 AD, De Saussure proclaimed that there are two types of gas exchange: one type takes place in the light, the other in the dark, and that it is the green parts of the plant that absorb CO2 and release O2 in the presence of light. Then there proceeded continuous discoveries in this field.

In 1942 AD Meyer said that the original source of energy used by plants and animals is the sun and that the light energy absorbed by plants is converted into chemical energy through photosynthesis.

In 1961 AD Glass said that the most significant compounds involved in the process of converting the light energy into chemical energy in plants are the pigments found inside the chloroplasts or “pigment carriers”.

The plant starts photosynthesis by means of these components and organelles. All this results in producing carbohydrates which are involved in complex biological processes that produce the raw material for the cellular wall, amino acids, proteins, lipids, hormones, pigments, …etc. These substances are the essential matter to make all the plant parts that people and animals feed on.

Aspect of the miracle

Scholarly researchers in the field of plant physiology have discovered that the green substance (the chloroplasts) absorbs the light energy and converts it into chemical energy to produce various fruits. This discovery was realized after continuous studies and various experiments that lasted for three centuries, up to the twentieth century.

This process of producing grain, fruits and trees was an unknown secret hidden deep in the thylakoids of the chloroplasts that cannot be seen with the naked eye and which have been known by botanists only after a prolonged series of continuous researches and studies carried out by scholars over several centuries.

Only after methods of precise scientific investigation were available that they ultimately declared that in the plant there is a green substance and that it is this substance that produces carbohydrates that constitute the basic matter for producing all types of fruit, trees and vegetation.

This is what the Holy Qur’an decided fourteen centuries ago and was conveyed by an illiterate Prophet who lived in a desert environment among an illiterate nation at a time when no equipment of scientific research was available.

The Verse of the Holy Qur’an could have done without mentioning the “green substance” and nobody would have objected to that, except one that knew the fundamental role of that substance. However, its mention implies that the one who mentions it knows well its main role in the production of grain, fruit and all trees and vegetation. How great it is of the Holy Qur’an to mention the truth and guide people on the road to find out the secret, by saying:

“Look at (and think over) their fruits when they begin to bear fruit and (look at) the ripeness thereof.”

It draws the attention to the beginning of the fruit formation and its relation with ripeness whereupon no more fruits are produced because the leaves of some plants turn yellow and their cells die.

Who, then, informed Muhammad (Peace be upon him) of this fact? Muhammad, the illiterate Prophet, who lived in an illiterate culture, at a time when the simplest instruments were not available, let alone possessing the advanced instruments and research centers and laboratories in the field of plant physiology that are required to discover these facts.

The existence of this precise botanical information in the Qur’an proves that it is from Allah, Who says:

“But Allah bears witness to that which He has sent down to you. He has sent it down with His Knowledge, and the angles bear witness, and Allah is sufficient as a witness.” (Quran 4: 166)