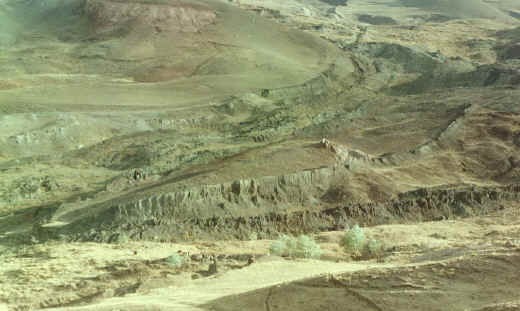 The Holy Books give account of the perished nations to its adherents and stress the reasons behind their punishment, mentioning such stories is just a warning against receding back on the straight path and rejecting God’s percepts.

The problem with the Holy Book is that it was written long time after its revelation, sometimes the scripts inserted their opinions, and sometimes they copied from the ancient nations heritages. There are a lot of evidence to the human tampering in the Holy Book.

We don’t mean to hurt any one nor do we mean to make a comparison between the Holy Books, all we mean here is to prove that human tampering found its way in the Torah and thus it is not reliable in many parts as we are not sure what is divine and what is human.

Also, we want to prove for non-Moslems that the Holy Quran is God’s word, we will depend on the most recent discoveries.

There has been disagreement between the Torah and the Quran as regard the place where the ship finally rested. Unlike the Holy Book , The Holy Quran mentions eights facts that were revealed more than 1400 years ago and these facts are completely in agreement with the newly discovered facts.

Foremost among these is that the Holy Quran promised that the ship will be left for those who have eyes with witch they could see and hearts with which they could understand. God says in the Holy Quran what means: And indeed, We have left this as a sign, then is there any that will remember (or receive admonition)? ( AL-kumr:15)

It is really a challenge that time and technology proved true ,that challenge is correct. The Holy Quran, unlike the previous holy books states clearly “the remaining on Noah’s Ark”, God says what means” And indeed, We have left this as a sign, then is there any that will remember (or receive admonition)? This promise has come true as the remains of Noah’s Ark and its stamp(mark) was found on the Kurdish mountains, south of Turkey, at a distance of 8 Km from the Iraqi borders at the hands of scientific team headed by Ron Wyatt and David Fasold in 1978.

There are eight important discoveries regarding Noah’s Ark, which are completely in agreement with the Holy Qu’ran:

(1)The location of the ship

The Holy Quran, when reciting stories and unlike the Holy Book, doesn’t give much interest on the locations or numbers as it focuses only on the spiritual dimensions , the moral lessons and setting the exemplary but in the recount of Noah’s Ark, we will find the name of the place in which the ship landed or settled mentioned in the Holy Quran.

Before we read the report about Noah’s ark that came after long study and used the most advanced technological tools at the hands of the most celebrated scientists , we would like to refer to the opinions of the present Torah.

The Aramaic Torah( Targums) says the location is JUDI MT

The ancient Babylonians literature , The Genesis Rabba and Josephus followed the Aramaic opinion.

In 1848, a big earthquake hit a flat area in Judi are in the south of Turkey and as a result it made it rise and a stamp of a huge ship appeared . This place was owned by a farmer known by the name “Rasheed” ,who told a dishonest journalist about his discovery. Wishing to compliment the Torah adherents , the journalist wrote his report stating that the farmer found half of the ship submerged in the ice of the mount of Ararat just as the present Torah states, this made Anglican American explorers go to the place to study it but found nothing. Matters remained as so till some pictures were taken for the location in 1959, in these pictures the stamp of the ship was clear and these pictures found its way into the American press, So a large team of scientists under the leadership of Renah Nourbrgmn, an American writer and John Van Deman, a well-known Tv Anglican proponent , went to the place; they, unfortunately, searched for wood remains, they committed a big mistake because they did not know that that such wood must have silicified in the course of time, so they left the place and wrote a report saying that it is nothing but a geological formation.

Ra’sheed, the first one to have discovered the arc

The historical fact is compatible with Quran for two reasons:

First: there can’t be any remains or fossils for Noah Ark, as the present Hebrew Torah claims, at Arrat mountain because of the volcano that erupted in that mountain in 1840 and this was affirmed by a Russian scientific study that was reported by Antrafax News Agency in which the Cosmopoisk scientific research center says “. What could be ship wood was nothing but silicified remaining of plants that the volcanic emissions made. This debunks the misinformation that the previous scientific team faked to agree with the distorted Torah passage. They even brought forth some pieces of wood to support their false allegation which-as we have shown- proved to be a hoax .These pieces of information were taken from a documentary film under the name“The Discovery o Noah’s ark”

Second: A scientific American team actually found the stamp of the ship on “Judi” mountain

The Holy Quran uses the Arabic word” Foulk” when referring to Noah’s Ark.

This word was mentioned eight times in the Holy Quran.

a) The round place that rises or emerges from the earth.

c)A huge ship---- so the Quranic word” Foulk” is the most suitable when talking about this ship; its length reaches as far as 550 feet and this is the biggest ship man ever built.

3-The shape of the ship:

Here, the Torah gives wrong description of the ship as it states that the ship length is six times bigger than its width, according to this calculations this ship must have been like a rectangle, according to hydrodynamics a ship with such specifications  can’t stand high waves as its front part must have been flat.

The holy Quran gives the ship the name “Foulk” which means a huge ship, the word is repeated eight times in Quran and in one time the Quran uses the word “ship” only to emphasize the fact that it was a real ship with the same known facts about ships. We can also conclude from the Holy verses that this ship must have doors.

According to new testament, the ship looked like the Ark of covenant and this means that the ship front end was not streamlined not pointed, it was rectangular shape and this couldn’t have helped the ship if it had been with such specifications.

The documentary film about the ship found in the south of Turkey affirms that mathematical constants such as (PI) and (PhI)and other laws were used in building the ship, these are the same constants that arrange the seeds of the flowers , the horns of animals and the sea waves in balance. How could Noah reached such laws?!!!! These could be the meaning of the Quranic previous verse “And construct the ship under Our Eyes and with Our Inspiration”(Hud:37)Unlike the Holy Book, the Holy Quran is silent over some other unnecessary facts such as the measurements of the length and the width and the number of the floors in the ship. The miraculous building of the ship that was revealed to Noah was discovered by modern discoveries; the documentary film states that there was a large cavity at the bottom of the ship that helped in ventilating the ship and to suppress the impact of the like mountain waves that were hitting the ship – this kept the ship balanced in such high waves otherwise it could have been drowned, building the ship is such a miraculous way helped it though no metals , sails or pilot to keepit safe and sound in such high mountains.

(5) The resting anchorage of the ship

When I saw the picture of the place that carries the stamp of the ship, I found it a little slope. “ The Holy Quran is so accurate in choosing its words.” I thought. The Holy Quran says that the ship rested flat or evenly , no implication in the Holy verse of any kind of inclination.

On hearing the witness of the Kurdish farmer in whose farm the ship was found, this is misunderstanding was settled down because he said that the land where the ship appeared was flat or even but owing to the earthquake that hit the place , this mass of the ship rose making the ship side a little slope.

David Fasold says in The documentary film that a lot of man-made anchors were found in some nearby villages that are located at a height of 6000 feet above the sea level and at a distance of miles from the actual location of the ship. David Fasold comment can be correlated with the Holy verse that says “And construct the ship under Our Eyes and with Our Inspiration”, these anchors took the shape of a rectangle and at the top there is a hole in which ropes were inserted, these were similar to the anchors used in ancient time, some of which are kept in the Lebanon coast. A lot of these anchors can be seen at the Mediterranean coast. It is observed that the Ark anchors are much bigger and much heavier.

Among the most important findings that were found in the surrounding of the ship by RON WYATT in the end of the 1970’s of the 20th century are the huge rivets, these had undergone some changes because of silica that reacted with these material of these rivets.RON WYATT used a new technology to find these nails, he used metal detectors that looks much like mine detector, they found metal sediment inside the walls of the ship, they visited the place again in 1984 and took a sample of these sediments and conducted some experiments on it in highly advanced laboratory and the result affirms the fact that these are man-made metals, these findings is in agreement with what the Holy Quran mentioned regarding building this ship more that 1400 years ago, the Holy Quran says “And We carried him on a (ship) made of planks and nails (Hud:41)

Though this story occurs at the Holy Book and many other ancient heritages , they have not mentioned this important part which the Holy Quran has mentioned it.

David Fasold used a device called generator Molecular frequency to detect the places of the rivets, the result was amazing as it has proved that the ship was highly structured, it showed many planks joined together like squares joined together with rivets.

To answer those who claim that the man can’t have known metal at such an ancient time , we say this is impossible and needs evidence , there are a lot of evidence to the fact that man have known netals and used it.The American science magazine states that man discovered metals and could use it efficiently (Sept.2005 Number, P.49)

These are not only the eight findings albeit they are the most important, they also have found excrement of the animals that turned into fossils (coprolites) in addition to that they have found pallets.

I wonder how a ship like this without sails or an engine or even a pilot could cleave asunder its way among waves so fast and high like huge mountain?!!!!

How could its riders survive the extreme cold , it must have been so dark and cold because the sun rays must have been blocked for a long time because of the heavy clouds.