In these verses disbelievers are questioning how could Allah bring them back after death after they are converted into bones and dust? But God tells his prophet Muhammad (PBUH) to say to them: even if you are converted after death into stones or even iron, God is still able to bring you back to life.

Fossils are the preserved remains or traces of animals, plants, and other organisms from the remote past. The totality of fossils, both discovered and undiscovered, and their placement in fossiliferous (fossil-containing) rock formations and sedimentary layers is known as the fossil record. Fossils range from thousands of years to many millions of years in age.

The observations that certain fossils were associated with certain rock strata led early geologists to recognize a geological timescale in the 19th century. The development of radiometric dating techniques in the early 20th century allowed geologists to determine the numerical or "absolute" age of the various strata and thereby the included fossils. [1]

The only way we know anything at all about prehistoric life is through fossils. Some people refer to specimens of dinosaurs as "dinosaur bones", but in fact, they are not. No organic material can remain unchanged for millions of years. That is why, the only pieces of the past that survive to be looked upon by human eyes, do so as rocks, or fossils, as they are called when they came from living organisms. So really, there are no dinosaur bones left anywhere, just the ones that have been turned to stone. [2]

How do things turn to stone, or become fossilized? First of all, a very small amount of prehistoric life got fossilized. In order for this phenomenon to take place, conditions had to be exactly right. It was just like winning the prehistoric lottery.

Only the hard parts of an organism can become fossilized, such as teeth, claws, shells, and bones. The soft body parts are usually lost, except for in very special conditions.

How Bones are converted into Stones or Iron?

Bones of animals or humans are fossilized by replacement of its components by minerals.Replacement occurs when the shell, bone or other tissue is replaced with another mineral. In some cases mineral replacement of the original shell occurs so gradually and at such fine scales that microstructural features are preserved despite the total loss of original material. A shell is said to be recrystallized when the original skeletal minerals are still present but in a different crystal form, as from aragonite to calcite.

The minerals that usually replace the bones are calcite or silica or pyrite and these minerals can be divided into two categories:

Calcite and silica are common constituents of many types of rocks and silica is the most abundant mineral in the earth crust, so when the bones are replaced by calcite or silica; it forms bones-shaped stones. So a fossilized bone is just a rocky model of an ancient bone. A fossil is composed of different materials than the original bone was. During the fossilization process, the original atoms are replaced by new minerals, so a fossil doesn't have the same color (or chemical composition) as the original object.

These fossils are formed when the bones are replaced by Iron pyrite or other Iron ores; it forms bones-shaped Iron. This process is called Pyritization, The mineral iron pyrite is an iron sulfide with the formula FeS2. This mineral's metallic luster and pale-to-normal, brass-yellow hue have earned it the nickname fool's gold due to its resemblance to gold. [3] 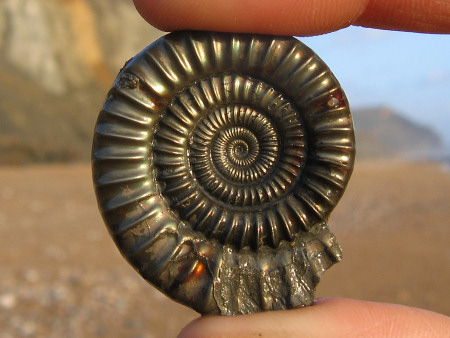 So it is clear that bones are preserved for millions of years when it is replaced by minerals like calcite and silica forming a rocky model of the bones or replaced by Iron pyrite or other iron ores.

This fact proves the Divine origin of the holy Quran as there were no means in the time of Quran revelation to know this magnificent fact.