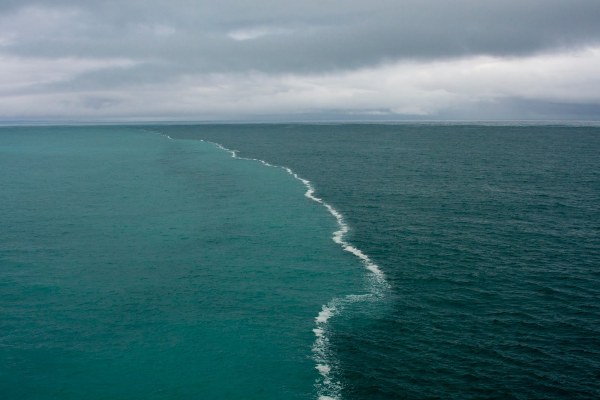 Oceanographers, in the wake of the scientific progress in this age, have discovered the barrier between two seas. They have found that a barrier separates two neighboring seas.

The barrier moves between them, and it is called by scientists “a front” compared to the front between two armies. By virtue of this barrier each sea retains its own characteristics, which Allah (SWT) has assigned to it and which are suitable for the organisms living in that environment.

The gradual progress of human knowledge about the fact of the differences between seawater masses and the existence of barriers between them:

Oceanographers discovered that there were certain differences between water samples taken from various seas in 1284 AH/1873 AD, by the British Marine Scientific Expedition of the Challenger Voyage. It was discovered that masses of seawater vary in their composition, in respect of salinity, water temperature, density and types of marine organisms. The data were obtained from 362 oceanographic stations. The report of the expedition filled 29,500 pages in 50 volumes and took 23 years to complete. One of the great achievements of scientific exploration, the expedition also showed how little man knew about the sea.

After 1933 AD another American expedition set out in the Mexican Gulf and installed hundreds of sea stations to study the characteristics of seas. It found out that a large number of stations in a certain area gave similar information about the characteristics of the water in that area, whether in respect of salinity, density, temperature, marine organisms or solubility of oxygen in water, while another group of stations in another area gave a different set of data about that area. So, oceanographers concluded that there were two distinctive seas with different characteristics, and not just limited samples as the Expedition of Challenger showed.

Man installed hundreds of marine stations to study the characteristics of various seas. Scientists have found out that the differences in these characteristics distinguished one sea from another. But why do these seas not mix and become homogeneous in spite of the effect of tide and ebb that moves sea water twice a day, and causes seas to move forward and backward turbulently, besides other factors that cause sea water to be in continuous movement and turbulence, such as surface and internal waves and sea currents?

The answer appeared for the first time in scientific books in 1361 AH/1942 AD. Extensive studies of marine characteristics revealed that there are water barriers separating neighboring seas and maintaining the distinctive properties of each sea with respect to density, salinity, marine life, temperature and solubility of oxygen in water.

After 1962 AD there was known the role of sea barriers in modifying the properties of the water masses that pass from one sea to another, to prevent one sea from overwhelming the other. So salty seas retain their own properties and boundaries by virtue of these barriers.

The following figure shows the boundaries of the Mediterranean warm salt waters on entering the Atlantic Sea, the waters of which are cold and less salty.

The Mediterranean Sea water as it enters the Atlantic over the Gibraltar still with its own warm, saline,   and less dense   characteristics, because of the barrier that distinguishes between them. Temperatures are in degrees Celsius (Co). (Marine Geology, Kuenen, p.   43,   with   a  slight enhancement.)

Finally man managed to photograph these wavy moving barriers between salt seas through a special technology of thermal photography by satellites, which shows that seawaters, though appearing as one mass, are in reality different masses as reflected by different colors according to thermal differences.

A field study comparing the waters of Oman Gulf and those of the Arabian Gulf has shown the difference between them regarding their chemical properties, the prevalent vegetation and the barrier separating them.

About a hundred years of research and study has been required to discover the fact of the existence of barriers between seawater masses and their role in making each sea retain its own properties. Hundred of researchers took part and numerous precise scientific instruments and equipment were used to achieve that.

Fourteen centuries ago the Holy Qur’an revealed this fact. Allah (SWT) says: “He has let free (MARAJA) the two sees meeting together. Between them is a barrier that they do not transgress. Then which of the Blessings of your Lord will you both (Jinn and men) deny? Out of them both come out pearls and carol.” (Quran 55:19-22) Allah (SWT) also says: “And He made a barrier between the two seas.”

Linguistic meanings and the commentators’ sayings:

Ibn Faris said: “’maraja’: The consonants m, r and j form a root indicating a movement of going and coming and turbulence.”

If the word “bahr” is used without qualification it means salt water; otherwise, it means the thing qualified.”  The Holy Qur’an uses “nahr” (river) to indicate abundant running fresh water, while it uses “bahr” (sea) to indicate salt water. Allah (SWT) says: “And He has made the ships to be of service to you that they may sail through the sea by His Command; and He has made rivers (also) to be of service to you.” (Quran 16:32)

In the hadith, “bahr” (sea) is also used to mean salt water. Allah’s Messenger (Peace be upon him) was asked by a man who said: “O Allah’s Messenger! We travel by sea and carry with us a little fresh water. If we should use it for wudu’ (ablution) we would get thirsty. May we use seawater for wudu’? Allah’ Messenger (Peace be upon him) said: “Its water is pure and its dead (animals) are lawful (to eat).”

Al-Barzakh: It is the barrier. Most commentators suggest that it is invisible.

Who knew in the past that salt seas differ in many respects in spite of their apparent similarity to the observer? (They all taste salt, look blue, have waves, contain fish, etc.) How can they differ although they meet each other? We know that when two amounts of water are mixed in a container they get homogenous. How can seas remain differentiated even in the presence of the factors of mixing, such as the ebb and flow of the sea, currents and storms?

The Verse mentions the meeting of two salt seas that differ from one another. If the two seas were similar to one another, they would be one sea. However, differentiating between them in the Qur’anic utterance implies the difference between them although they are both salt.

“He has let free (Maraja) the two seas meeting together” means that the two seas are mixed; they are in the state of backward and forward movements, of mixing and turbulence at the site of the meeting, as is understood from the literal meaning of “Maraja”.  This is the fact that science has discovered, that is to say, the barrier is described as being zigzag or wavy and shifting in position during the various seasons because of the tide and winds.

This Verse by itself implies the presence of so much mixing and merging between these seas as would deprive them of their distinctive properties. But Allah (SWT), the All-Knower, shows in the following Verse that “between them is a barrier which they do not transgress”, i.e. In spite of this state of merging and turbulence that characterizes the seas there is a barrier between them preventing them from transgressing or exceeding their limits.

This is what man has discovered as a result of the advances achieved in his sciences and instruments. It has been found that a third water mass separates the two seas and it has such properties as are different from those of each of the two seas separated by it.

Yet, in spite of the presence of the barrier, the waters of the two adjacent seas mix very slowly without one sea encroaching upon the other through carrying over its own properties to it, for the barrier zone is a region for changing the water crossing from one sea to the other so that it gradually acquires the properties of the sea that is going to enter and loses the properties of the sea it has come form. Thus neither of the two seas transgresses by carrying its own properties to the other, although they mix during the process of meeting. How truthful is Allah’s Saying: “He has let free (maraja) the two seas meeting together. Between them is a barrier which they do not transgress.”

The Miraculous Aspects of the Previous Verses:

We can conclude the following from the discussion above:

1. The Holy Qur’an, which was revealed more than 14 centuries ago, includes very precise pieces of information and knowledge about marine phenomena that have been discovered only recently by means of very sophisticated equipment. An instance in this respect is the existence of water barriers between seas. Allah (SWT) says: “He has let free (maraja) the two seas meeting together. Between them is a barrier which they do not transgress.”

2. The historical development of Oceanography shows that no precise information had been available on seas before Challenger Expedition (in 1873 AD), let alone at the time when the Holy Qur’an was being revealed 14 centuries ago to an illiterate Prophet who lived in a desert environment and never traveled by sea.

3. Oceanography has witnessed no advances except in the last two centuries, particularly in the latter half of the twentieth century. Prior to that a sea was considered as something fearful and mysterious. Myths and superstitions were fabricated about it. Sea voyagers were only interested in their own safety and how to find the correct routes during their long journeys. Man discovered that salt seas are different only in the thirties of the twentieth century, after thousands of marine stations had been established by researchers to analyze samples of sea water to measure the differences between the degrees of temperature, salinity, density and oxygen dissolubility in the sea water recorded at all those stations, and  then realize that salt seas are different.

4. Man did not know anything about the barrier that separates salt seas till the establishment of the aforesaid stations, and after spending a long time tracing these wavy moving barriers that change their geographical locations with the change of seasons.

5. Man did not know that the water masses of the two seas are separated by a water barrier and are mixed at the same time till he started studying with his ships and equipment the water movement in the meeting region of the seas and analyzing the water masses in those regions.

6. Man did not apply this rule to all seas that meet together except after vast scientific surveying, investigation and verification of this phenomenon, which occurs between each pair of adjacent seas in the world.

Now then, did Allah’s Messenger (Peace be upon him) own stations and equipment for analyzing water and the ability to trace the movement of various water masses? Did he carry out a comprehensive surveying process, although he never sailed the sea and lived at a time when superstitions were prevalent, particularly in the field of seas?  Were, at the time of Allah’s Messenger (Peace be upon him). Such researches, instruments and studies available as they are for the oceanographers of today that have discovered all these secrets by means of research and study?

It also indicates that the one to whom the Book was sent down was a Messenger inspired. Allah (SWT) but says the Truth in the  Verse:" Soon will We show Our Signs in the Universe and in their own selves, until it becomes manifest to them that this is the Truth. Is it not sufficient that your Lord does witness all things?” (Quran 61:53)