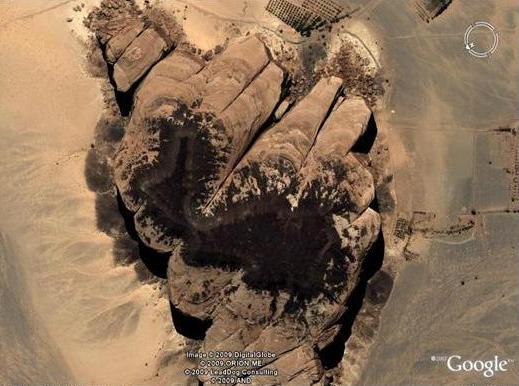 Thamud, one of the perished nation, lived in a valley which is about two hundred meters above sea level, it is also surrounded by tall mountains with 1200 meters average height.

The account of the Holy Quran about these nations shows that they were skilled in stone sculpture, Allah gifted them with many bounties and that they led luxurious life.

When God sent them a prophet from among themselves, they belied him and hold his name to obloquy and ridicule; they attacked him with abusive words. When their great prophet persisted in teaching them God's word, they set as a condition to believe that he should bring them a she-camel out of a huge rock.

The holy Quran explanation books say  that the she-camel that God sent to the tribe of Prophet Saleh came out a huge rock, this rock lies isolated in the area where they lived.

The expounders of the Holy Quran say that Prophet Saleh came to his tribe to admonish them to believe and warn them of the consequences of unbelief, they asked for a sign to believe; they pointed to a large rock and said:

"Can you see this large rock? We want you to get out of this rock a she-camel with a baby in its belly; they started to set many conditions in these she-camels, they even were particulars and choosy. The prophet said' So what will you do if God gives you His sign? Will you believe?'"  "Yes, we will." They said. So the prophet prayed to God and God answered his prayer and a huge camel went out from the rock, it was exactly as they asked. When the say this miracle, some believed and some didn't.

It is narrated that the prophet gave his companions a lot of information about this tribe and how they were perished. The prophet and his companions passed by " Alhager", the place in which the prophet  Saleh and his tribe lived in" on his way back from Tabouk invasion.

Gabr narrated that  when the prophet passed by "Al-Hajer" (the habitations of Thamud), he said: " O' people don't ask for signs the same way Thamud did." Those were the people to whom Prophet Saleh was sent, and they asked him for a sign sent by God to them, so God created out for them a she-camel out of a rock they determined.

As to the features of the rock concerned, we can compare its features as mentioned in  the books of expounding the Holy Quran  and these of the rocks that are  existent in the valley, we shall depend on Google earth programme.

The prophet and his companions passed by the valley in which there used to be the habitations of Thamud. Those people, in order to believe, asked their prophet' Saleh' to show a sign  or a miracle to prove his prophethood , and they determined the rock from which this she-camel should come from, this rock  had to be massive and the she-camel must be pregnant and also parturient, they also determined  the rock by a certain  name which is " Al-kataba'.

Their Prophet agreed and put them under the commitment that they should believe if God showed this sign to them  and they agreed. He started to pray to his Lord to answer his prayer and bring them a she-camel from the rock so that they believed. God answered his prayer and the rock cleft asunder and the she-camel went out from it exactly as they wanted; on seeing it some believed and some did not. 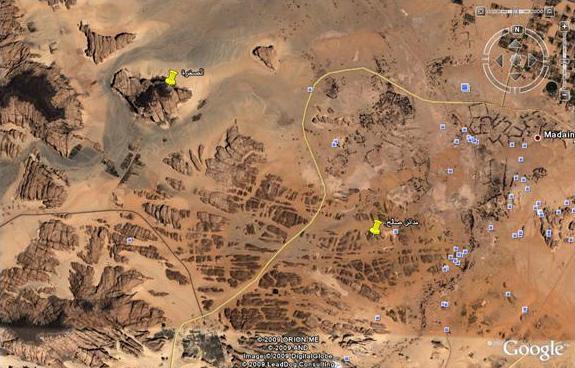 If we look at the picture keenly, we will see a huge rock covered with blackness, and this rock is located in isolated place in the upper part of the valley to the right. This rock is so huge and this makes it looks much like a mountain; it has odd appearance and this lays credence to the claim that those people used to worship their idols around it, its longest part amounts to(1500 M), and its widest part is about(700m), the highest hill on it reaches (100m) above  the surrounding area. We will give a plethora of evidences that this rock was the one from which the she-camel went out from.

The name of the rock is" Al-Kataba" which can be translated" the writing" , the word is a present participle in Arabic, if you look closely at the picture you will find it taking the shape of "the palm of hand", and what look like fingers come out from the rock.

We can deduce the second proof from the narration that says" the stone has moved then cleft asunder to let a she-camel go out", a close look at the rock supports this narration; there is a subside in the ends of the rock, one of these subsides reaches(80) meters. Surely the going out of the she-camel must have caused such a malformation  in the rock and that is why the corners of the rock subsided to be evidence to the emergence of the she-camel from the rock.

It is amazing that there are only two rocks which carry the sign of subsiding, they are near each other, and this is a proof that the she-camel went out from it.

The third evidence is that there is a black volcanic crater which takes the form of a she-camel in the sitting position, the length of the crater is fifty meter and the width is about twenty meters. The existence of this crater poses many questions that geologists can give answers too. Though the rock is big, it can't bear the signs of the explosion of a volcano because, if ever a volcano happened in it, it could have changed into pieces. One more question; the crater outline is clear and it has a geometrical shape which is different from the usual shapes of the volcanoes.

One more significant point; there is no traces of lava, this means that the volcano had erupted for a short time and the power of the explosion was so great that the lava gushed out were thrown away in the surrounding area.

I will explain how this punishment was inflicted on the tribe of Saleh after they killed the she-camel, this can give answers to these questions, in the following holy verses God says what means:

"And O my people! This she-camel of Allah is a symbol to you: leave her to feed on Allah's (free) earth, and inflict no harm on her, or a swift penalty will seize you!" (64) But they did ham-string her. So he said: "Enjoy yourselves in your homes for three days: (Then will be your ruin): (Behold) there a promise not to be belied!" (65) When Our Decree issued, We saved Salih and those who believed with him, by (special) Grace from Ourselves - and from the Ignominy of that day. For thy Lord - He is the Strong One, and able to enforce His Will. (66) The (mighty) Blast overtook the wrong-doers, and they lay prostrate in their homes before the morning,- (67) As if they had never dwelt and flourished there. Ah! Behold! for the Thamud rejected their Lord and Cherisher! Ah! Behold! removed (from sight) were the Thamud!(11:64-68)

Then they ham-strung the she-camel, and insolently defied the order of their Lord, saying: "O Salih! bring about thy threats, if thou art a messenger (of Allah)!" (77) So the earthquake took them unawares, and they lay prostrate in their homes in the morning! (78) So Salih left them, saying: "O my people! I did indeed convey to you the message for which I was sent by my Lord: I gave you good counsel, but ye love not good counsellors!" (7:77-79)

So when it was Sunday, a blast from heaven overtook them and they were seized by an earthquake and all died at the same time.

It is known that eruptions of volcanoes are always preceded by earthquakes and this what happened in this area; the earth began to shake violently under them and then the volcanoes began to erupt from three locations; these are the hills of the two mountains to the west of the city and the rock from which the she-camel went out from as it is clear in the Google earth picture.

As we have already mentioned, the absence of the volcanic lava emphasized the fact that it abruptly, swiftly and violently erupted and  the sound of the volcano explosion caused all the people to die at once. This kind of volcanoes is termed" Spatter volcano', in this kind of volcanoes the stuff emitted is always composed of water vapor and carbon dioxide, and protruding edges are formed around the volcano as shown in this picture.

God says what means: For We sent against them a single Mighty Blast, and they became like the dry stubble used by one who pens cattle. (54: 31) 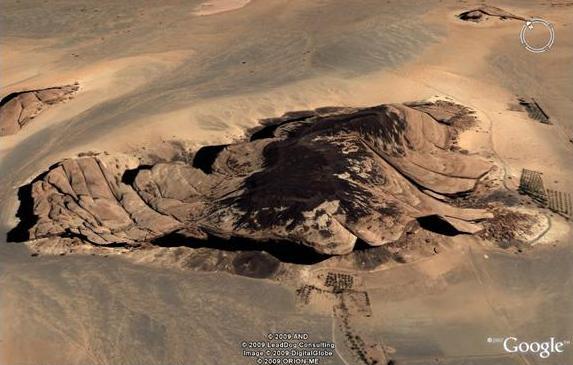 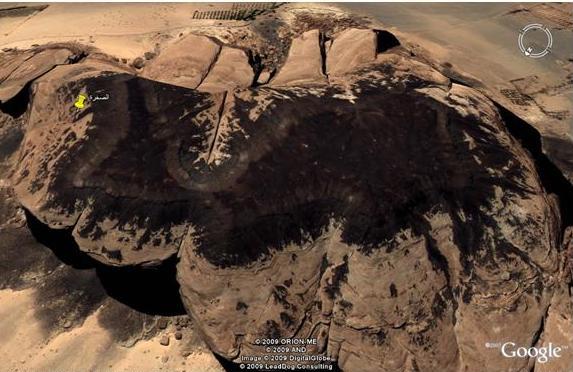