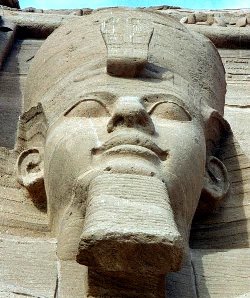 Below are some of the example verses from the Qur'an dealing with the ruler of Egypt during the time of Joseph(P) and Moses(P).

A few examples of the usage of the word King during the time of Joseph(P) are underlined in red in the Arabic text.

The king (of Egypt) said: "I do see (in a vision) seven fat kine, whom seven lean ones devour, and seven green ears of corn, and seven (others) withered. O ye chiefs! expound to me my vision, if it be that ye can interpret visions." [Qur'an 12:43]

More information about the usage of the word King during the time of Joseph(P) can be found in the Surah Yusuf.

A few examples of the usage of the word Pharaoh during the time of Moses(P) underlined in red in Arabic text.

Then after them sent We Moses and Aaron to Pharaoh and his chiefs with Our Signs. But they were arrogant: they were a people in sin. [Qur'an 10:75]

And there are more examples of the usage of Pharaoh during the time of Moses(P) can be found in many other verses.

3. Egyptology At Our Rescue

What does modern Egyptology tells us about the rulers of the Egypt and when they were called as Pharaohs? The Encylopedia Britannicainforms us under "Pharaoh":

(from Egyptian per 'aa, "great house") , originally, the royal palace in ancient Egypt; the word came to be used as a synonym for the Egyptian king under the New Kingdom (starting in the 18th dynasty, 1539-1292 BC), and by the 22nd dynasty (c. 945-c. 730 BC) it had been adopted as an epithet of respect. The term has since evolved into a generic name for all ancient Egyptian kings, although it was never formally the king's title.[1]

Most of us are unaware of this minor but very important point that the rulers of Egypt were called Pharaohs only in the New Kingdom period. Loosely speaking, in layman terms, all the Egyptian rulers are addressed as Pharaohs which is, of course, incorrect.

Let us briefly see what are the current hypothesis concerning the entry of Joseph(P) into Egypt. There are two well-known hypothesis. The first one is that he entered Egypt during the time of Hyksos. Hyksos belonged to a group of mixed Semitic-Asiatics who were settled in northern Egypt during the 18th century BC. Around 1630 they seized power, and Hyksos kings ruled Egypt as the 15th dynasty (c. 1630-1521 BC). The name Hyksos was used by the Egyptian historian Manetho (fl. 300 BC), who, according to the Jewish historian Josephus (fl. 1st century CE), translated the word as "king-shepherds" or "captive shepherds". Hyksos was probably an Egyptian term for "rulers of foreign lands" (heqa-khase).

The second one is that Joseph's(P) entry into Egypt took place during 12th Dynasty of Middle Kingdom Period. The ruler during his time is supposed to be Sesostris III. It is not our aim get into the research involved in finding the period. There are many issues involved here, e.g., Egyptology data, the doubt whether the Bible writers who were writing about the events, were eye-witnesses or whether the story of Joseph(P) was narrated/written many centuries later after the actual event. Interestingly, The Interpreter's Dictionary Of The Bible understood some of the discrepancies in the Egyptology data concerning the Story of Joseph(P) and states that:

The frank attitude toward the stories about Egypt in Genesis and Exodus is that folk memory had retained the essentials of great Hebrew experience but had later clothed that memory with some details imperfectly recollected and some circumstantial details borrowed from later times and conditions.[2]

In gist, the entry of Joseph(P) into Egypt occured before the ruler of Egypt was called Pharaoh. The use of Malik (King) instead of Fir'awn (Pharaoh) by the Qur'an represents historical accuracy with the data available to us. Whereas the mentioning of Pharaoh as a ruler during the time of Joseph(P) in Genesis 41 (and more so in the time of Abraham(P) in Genesis 12!) is an anachronism.

In the case of Moses(P), most of the scholars place the events of oppression and exodus in the New Kingdom Period when Merneptah and Ramases II were the rulers. They were of course, called Pharaohs. Hence the Qur'an is correct in the usage of the word Fir'awn (Pharaoh) for the ruler of Egypt.

With the current data available to us from Egyptology, the mentioning of the ruler of Egypt is addressed as King (Malik, in Arabic) during the time of Joseph's(P) and Pharaoh (Fir'awn, in Arabic) during the time of Moses(P) by the Qur'an is amazingly accurate. The Bible writers, on the other hand, while writing about the stories of Abraham and Joseph(P) used the term Pharaoh for the rulers of Egypt which is anachronic. Further studies in Egyptology will shed more light on the lives of the Prophets(P) in Egypt, inshallah.