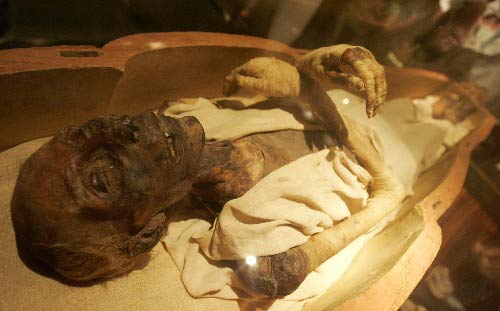 The Description Contained in the Holy Scriptures of the Pharaoh's Death During the Exodus. 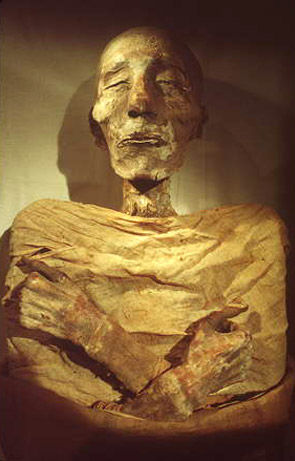 This event marks a very important point in the narrations contained in the Bible and the Qur'an. It stands forth very clearly in the texts. It is referred to in the Bible, not only in the Pentateuch or Torah, but also in the Psalms: the references have already been given.

It is very strange to find that Christian commentators have completely ignored it. Thus, Father de Vaux maintains the theory that the Exodus from Egypt took place in the first half or the middle of Ramesses II's reign. His theory takes no account of the fact that the Pharaoh perished during the Exodus, a fact which should make all hypotheses place the event at the end of a reign. In his Ancient History of Israel (Histoire ancienne d'Israel), the Head of the Biblical School of Jerusalem does not seem to be at all troubled by the contradiction between the theory he maintains and the data contained in the two Books of the Bible: the Torah and Psalms.

In his book, Egypt and the Bible (L'Egypte et la Bible), P. Montet places the Exodus during Merneptah's reign, but says nothing about the death of the Pharaoh who was at the head of the army following the fleeing Hebrews.

This highly surprising attitude contrasts with the Jews' outlook: Psalm 136, verse 15 gives thanks to God who "overthrew Pharaoh and his host in the Sea of Rushes" and is often recited in their liturgy. They know of the agreement between this verse and the passage in Exodus (14,28-29): "The waters returned and covered the chariots and the horsemen and all the host of Pharaoh that had followed them into the sea; not so much as one of them remained." There is no shadow of a doubt for them that the Pharaoh and his troops were wiped out. These same texts are present in Christian Bibles.

Christian commentators quite deliberately, and in contradiction to all the evidence, brush aside the Pharaoh's death. What is more however, some of them mention the reference made to it in the Qur'an and encourage their readers to make very strange comparisons. In the translation of the Bible directed by the Biblical School of Jerusalem we find the following commentary on the Pharaoh's death by Father Couroyer.

"The Quran refers to this (Pharaoh's death) (sura 10, verses 90-92), and popular tradition has it that the Pharaoh who was drowned with his army (an event which is not mentioned in the Holy Text) lives beneath the ocean where he rules over the men of the sea, i.e. the seals".

It is obvious that the uninformed reader of the Qur'an is bound to establish a connection between a statement in it which-for the commentator-contradicts the Biblical text and this absurd legend which comes from a so-called popular tradition mentioned in the commentary after the reference to the Qur'an.

The real meaning of the statement in the Qur'an on this has nothing to do with what this commentator suggests: verses 90 to 92, sura 10 inform us that

“And We took the Children of Israel across the sea, and Pharaoh and his soldiers pursued them in tyranny and enmity until, when drowning overtook him, he said, "I believe that there is no deity except that in whom the Children of Israel believe, and I am of the Muslims - Now? And you had disobeyed [Him] before and were of the corrupters? - So today We will save you in body that you may be to those who succeed you a sign. And indeed, many among the people, of Our signs, are heedless” (Quran 10:90-92)

This is all that the sura contains on the Pharaoh's death. There is no question of the phantasms recorded by the Biblical commentator either here or anywhere else in the Qur'an. The text of the Qur'an merely states very clearly that the Pharaoh's body will be saved: that is the important piece of information.

When the Qur'an was transmitted to man by the Prophet, the bodies of all the Pharaohs who are today considered (rightly or wrongly) to have something to do with the Exodus were in their tombs of the Necropolis of Thebes, on the opposite side of the Nile from Luxor. At the time however, absolutely nothing was known of this fact, and it was not until the end of the Nineteenth century that they were discovered there.

As the Qur'an states, the body of the Pharaoh of the Exodus was in fact rescued: whichever of the Pharaohs it was, visitors may see him in the Royal Mummies Room-of the Egyptian Museum, Cairo. The truth is therefore very different from the ludicrous legend that Father Couroyer has attached to the Qur'an.