The frontal lobes are considered our emotional control center and home to our personality. There is no other part of the brain where lesions can cause such a wide variety of symptoms (Kolb & Wishaw, 1990). The frontal lobes are involved in motor function, problem solving, spontaneity, memory, language, initiation, judgement, impulse control, and social and sexual behavior. The frontal lobes are extremely vulnerable to injury due to their location at the front of the cranium, proximity to the sphenoid wing and their large size. MRI studies have shown that the frontal area is the most common region of injury following mild to moderate traumatic brain injury (Levin et al., 1987). 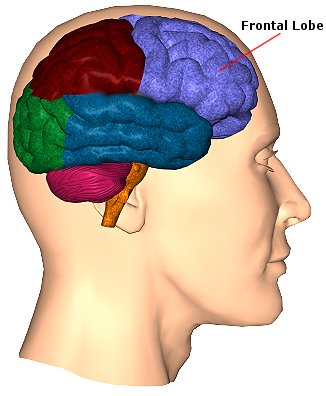 There are important asymmetrical differences in the frontal lobes. The left frontal lobe is involved in controlling language related movement, whereas the right frontal lobe plays a role in non-verbal abilities. Some researchers emphasize that this rule is not absolute and that with many people, both lobes are involved in nearly all behavior.

Disturbance of motor function is typically characterized by loss of fine movements and strength of the arms, hands and fingers (Kuypers, 1981). Complex chains of motor movement also seem to be controlled by the frontal lobes (Leonard et al., 1988). Patients with frontal lobe damage exhibit little spontaneous facial expression, which points to the role of the frontal lobes in facial expression (Kolb & Milner, 1981). Broca's Aphasia, or difficulty in speaking, has been associated with frontal damage by Brown (1972).

An interesting phenomenon of frontal lobe damage is the insignificant effect it can have on traditional IQ testing. Researchers believe that this may have to do with IQ tests typically assessing convergent rather than divergent thinking. Frontal lobe damage seems to have an impact on divergent thinking, or flexibility and problem solving ability. There is also evidence showing lingering interference with attention and memory even after good recovery from a TBI (Stuss et al., 1985).

One of the most common characteristics of frontal lobe damage is difficulty in interpreting feedback from the environment. Perseverating on a response (Milner, 1964), risk taking, and non-compliance with rules (Miller, 1985), and impaired associated learning (using external cues to help guide behavior) (Drewe, 1975) are a few examples of this type of deficit.

The frontal lobes are also thought to play a part in our spatial orientation, including our body's orientation in space (Semmes et al., 1963).

A new study has found the strongest evidence yet that what sets humans apart from other primates may be found in the brain's frontal lobes, particularly in an area the size of a "billiard ball" called the right prefrontal cortex.

Dr. Donald Stuss, one of the world's experts on the frontal lobes, led the study at The Rotman Research Institute, part of Baycrest Centre for Geriatric Care, and affiliated with the University of Toronto. The findings are published in the February 2001 issue of the international journal BRAIN and the subject of the lead editorial.

Understanding the mental processes of others -- mentalizing -- is the basis of our socialization and what makes us human. It gives rise to our capacity to feel empathy, sympathy, understand humor and when others are being ironic, sarcastic or even deceptive. It's a "theory of mind" that has been associated with the frontal lobes, but until now scientists have had difficulty demonstrating this ability to specific regions of the brain.

What is exciting about this study, according to Dr. Timothy Shallice of the Institute of Cognitive Neuroscience at University College London, is that the Rotman study came at this challenge with two different testing methods and both generated similar compelling evidence to show that these higher cognitive functions in humans are "localizable" to a specific region within the frontal lobes. Dr. Shallice wrote the lead editorial in BRAIN.

Dr. Stuss and his research colleagues tested patients who had damage to various parts of the frontal lobes, and other areas of the brain as well. The selective impairment in only some patients provided the ability to precisely localize those regions that are necessary when specific mentalizing tasks are performed. Co-authors on the paper with Dr. Stuss, who is director of The Rotman Research Institute at Baycrest, were Dr. Gordon Gallup, Department of Psychology, State University of New York at Albany; and Dr. Michael Alexander, Memory Disorders Research Centre at Boston University and Department of Neurology, Harvard University.

"In our study, we've shown that the frontal lobes were the most critical region for visual perspective taking, and the inferior medial prefrontal region, particularly for the right, for detecting deception," says Dr. Stuss. Visual perspective taking is the ability to empathize or identify with the experience of another person.

It has long been known that some patients with frontal lobe damage have significantly changed personalities. What is important about the study is that it helps families, friends and caregivers of the patient to appreciate and understand a very important reason why this occurs. This deficit in mentalizing can affect social cognition which is important in everyday human interactions. For example, patients with damage in the specific frontal area are often less empathetic and sympathetic, and they miss social cues which lead to inappropriate judgements.

In the study, 32 adults with lesions in frontal and non-frontal brain regions, most commonly as a result of stroke, and a control group of 14 healthy adults, underwent two seemingly very simple tests. Both tasks required participants to guess which coffee cup a ball was hidden under. Participants sat across a table from the experimenter and a table curtain was used on some occasions to conceal which cup the experimenter hid the ball under. The participant was asked to point to the correct cup.

In the second test on deception, an assistant sat at the table beside the experimenter and always pointed to a cup where the ball was NOT hidden. Participants had to infer that the assistant was trying to deceive them. Those with right inferior medial prefrontal damage had difficulty catching on to the ruse and were the most frequently deceived.