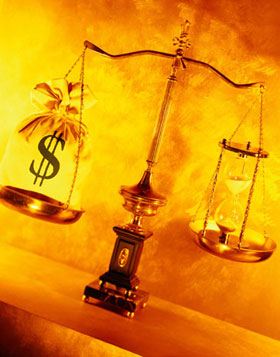 Western tradition regards work and labor as a cost incurred by those who want to consume the goods thus made available to them.  The natural condition of mankind is considered to be one in which the earth will not satisfy human needs except when human beings work to make it do so.

It is neither a logical nor an inevitable corollary of this view that less work is preferable to more.  Even in this tradition, it is logically possible that some work is much more agreeable than others, and perhaps so much so that some work ceases to be a cost incurred in satisfying wants.  It is, however, usual for this point to be ignored, particularly since an assumption common to economists from the nineteenth century onwards - and most explicit in the ideas of utilitarianism - is that efficiency and disagreeableness increase together, and that paid labor cannot be expected to offer much intrinsic satisfaction.

The concept of work in Islam (called ‘amal) is far broader and has different characteristics and objectives than that understood in the Western economic tradition.  In Islam, work ethic is defined by the Quran itself, which mentions the word ‘amal in 360 verses.  A closely related concept of fi’l (also translated as work) is mentioned in an additional 109 verses.  All these verses stress the need for work and action by human beings.  It is based on this emphasis on work that Islam is considered as the ideology of practice and the practice of ideology, a religion of action, and “the par axis of the believers.”[1]

The Quran considers idleness - or squandering of time in pursuit of unproductive and non-beneficial work - as the manifestation of lack of faith and of unbelief.[2]

Man is called upon to utilize “time” in pursuit of work by declaring that God has made the day as means of seeking sustenance.  A person who through hard work seeks God’s “bounty” - which includes all appropriate means of earning one’s livelihood - is most highly praised.  All able-bodied persons are exhorted to work in order to earn their living.  No one who is physically and mentally able is allowed to become a liability on one’s family or the state through idleness.

The work which everyone is required to perform must be “good” or “beneficial” (al-’amal al-salih), but no work is considered as inconsequential in terms of its rewards or punishments in this world and in the next.  One will have to reap whatever rewards or retributions are done as a result of his work.

Work, therefore, is regarded not only as a right but a duty and an obligation.  Islam extends to the individual the right to choose the type of work he desires, but along with this freedom comes the obligation to consider the needs of the society as well as the selection of the type of work permitted by the Shariah.

Since all class distinctions are negated by Islam, no line of work permissible by the Shariah is considered demeaning by Islam, which countenances only diversification on the basis of natural talents, skills and technology, or personal inclinations.  Based on its concepts of justice and contracts, Islam makes it an obligation for the worker to perform the tasks which he has contracted to the best of his ability, but since individuals are endowed with different abilities and talents, their productivities will differ.  Justice, however, demands that return to work of every individual must be commensurate with his productivity.

While Islam, in no uncertain terms, is against idleness and socially unproductive work, it maintains that those who are physically or mentally unable to work still retain a right to what the society produces.[3] This conclusion is based on the property-rights principle of invariant claim to ownership which maintains that all human beings have a right in the resources which God has provided for mankind.  Since the source of physical and mental abilities of human beings, due to which some members of the society are able to possess more than others, is also God, the right of ownership of those less able to the original resources remains valid; just as God’s original right of ownership of resources is not negated when they, along with the creative labor of individuals, are transformed into products, property and wealth.

Earlier, it was mentioned that laboring and owning are central to the Islamic concept of property rights.  Islam encourages man to utilize, to the fullest possible sense, all the resources that God has created and entrusted to man for his use responsibly.  Non-utilization of these resources for his benefit and for that of the society is tantamount to ungratefulness to God’s provision of these resources as is irresponsibility and extravagance.  Wealth is considered an important means by which man can pave the way for the attainment of his ultimate objective.  Islam refers to wealth as “good”, an object of delight and pleasure, and a support for the community.[4] Conversely, involuntary poverty is considered as undesirable.  This particular conception of wealth, however, is qualified in terms of earning, possession and disposition of wealth.

The earning of wealth is qualified through the emphasis on the fact that wealth is only a means for the achievement of man’s ultimate objective and not an end in itself.  It must be earned through “good”, “productive” and “beneficial” work.  This type of work is specified by the Shariah which defines the methods of earning wealth lawfully, not only are lawful methods of earning wealth specified, but also the types of economic activity which are prohibited are outlined.  The Shariah specifies non-permissible professions and trade and economic activity which may lead to unlawfully acquired wealth.  Even within each profession, the Shariah specifies proper and improper practices.  Unlawfully acquired or accumulated wealth for its own sake is condemned as “corruption” and retrogression to the basis of all human negative qualities, i.e., greed.

Islam considers wealth as the life-blood of the community which must be constantly in circulation; therefore, its possession excludes the right of hoarding (Quran 9:34-35).  The implication is that lawfully earned wealth must be invested within the community to improve its economic well-being.  Investing wealth is not only measured by the monetary gain associated with it, but also by the benefit which accrues to the society.  The needs of the society, therefore, must be a consideration for the owner of wealth.

Disposition of wealth is subjected to the rules of the Shariah as well.  The first and foremost among these rules is the recognition of the rights of others in this wealth, resulting from the principle of invariant claim to ownership.[5] Also among these rules are the levies whose amounts are specified and those levies whose amounts are left to the determination by the wealth owner.  All these levies fall due when wealth exceeds a specific minimum amount called nisab.  After these obligations are met, the remainder of wealth belongs to the owner but must be used in accordance with the rules of the Shariah. Among these are rules which forbid extravagance, opulence, waste or general abuse of wealth.[6] It cannot be used to harm others or to acquire political powers to corrupt the polity.

While Islam considers lawfully acquired wealth as subject to the protection of the Shariah, it regards the wealth owner as a trustee who holds his wealth as a trust on behalf of God and the community.  Hence, his inability to use his wealth properly provides the basis for the forfeiture of his right to his wealth.  Extravagance, waste and general abuse of wealth is the basis upon which the community can consider him a “safih”, a person of weak understanding and one in possession of “weak intellect”; and a person who along with his own financial and moral loss is damaging the interest of the community.  There is a principle (hajr) according to which such a person’s wealth is made the ward of the community, or it’s legitimate representatives, which may limit his right to use only a part of his property to meet his basic needs (Quran 4:5).  That wealth, therefore, is considered “good” and a “support” for the community in attainment, possession, and disposition of which all rules of the Shariah are observed.