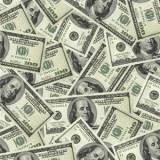 At times of economic hardship, when every good idea fails, just because "the money can't be found",

when a decline in services is explained with the need "to reduce the deficit", when business can't afford new investment because of the "high cost of borrowing", when mortgage rates have gone up so much that it becomes difficult to maintain a decent living standard, many small savers still think that high interest rates mean at least that they get the most out of their savings. The truth is, they pay more than they get.

According to most governments the only ways to control the deficit are to raise taxes or to cut government spending. However, considering that the deficit continues to grow simply because of the exorbitant amounts of compound interest added to the original debt, one of the most effective ways to reduce the deficit would be to reduce interest rates.

In fact, at zero interest, the debt would not grow at all, and the large amounts of money spent in servicing the debt could be used to pay it off.
Now consider what the Qur'an has to say on the subject of usury, that is lending money at interest:

(Those who devour usury will not stand except as stands one whom the devil by his touch has driven to madness. That is because they say: Trade is like usury: but Allah has permitted trade and forbidden usury.... Allah will deprive usury of all blessing, but will give increase for deeds of charity, for He loves not any ungrateful sinner.... O you who believe, fear Allah and give up what remains of your demand for usury, if you are indeed believers. If you do it not, take notice of war from Allah and His messenger, but if you repent you shall have your capital sums; deal not unjustly, and you shall not be dealt with unjustly. And if the debtor is in difficulty, grant him time till it is easy for him to repay. But if you remit it by way of charity, that is best for you if you only knew). (Qur'an 1:275-280)

How urgently is this message needed in a world where the "debt crisis" threatens to destroy and annihilate our civilization, were open warfare is increasingly the consequence of the anxiety and suffering that spring from third world debt. Politicians have seldom looked at money-lending at interest as the cause of widespread poverty in the midst of plenty, because whilst this practice was once forbidden by Judaism, Christianity and Islam alike, it has become universally accepted in the modern world of secularism. It has been argued that money is a "producer good" and that the lender should receive a share of the extra wealth that these goods produce. Yet this is illogical on several points.

The only true producer of wealth (i.e. goods and services) is Labor when it is applied to either Land or Capital. Unlike Land, Money is infinite when not artificially restricted, which it often is. Money is man-made out of nothing and at tiny real cost. This credit creation confers enormous economic power and influence on those usually private institutions who have secured for themselves monopoly rights in this money issue.

That private banks create money out of nothing is a fact too little known amongst the public. Our national debt stands at over 200 billion pounds, and that of other industrialized countries is of similar magnitude. Have you ever asked yourself who is that fabulous lender who always seems to have all the money which the government does not have? Whom does the nation owe the national debt? The truth is that when banks create money (as cheque-money or blips on computer screens) they lend what they have not got to reap where they did not sow. Their loans are not backed by any real wealth on their behalf. Nor do they lend out depositors' money (or when did the bank last tell you that you can't take out money from your account, because it has been lent to someone else?). When you give your house or business as guarantee for their money, this money is not backed by gold, silver or tangible wealth.

It is an empty promise except for the fact that the government, with the central bank as lender of the last resort, is ready to bail out the banks should a run on their money occur. Bank-created credit is based on the nation's capacity to produce and consume in the sense that whilst it is not issued nor backed by the government, the government - being the largest debtor - guarantees a certain return in debt service payments from its revenue.

An increasing part of local and national government taxation today is raised for the purpose of servicing the interest payments on local and national government debt. So whether you personality borrow or not, you pay the interest on that fictitious money. Likewise, when you take a bank loan, you pay at least twice: you give a guarantee of real wealth in case of default, and you pay a penalty (as interest) for accepting money as a loan which costs the lender nothing and did not exist until it was created as a loan to you. Heads you lose, tails you lose again...

As should be evident by now, to base an economy on interest is a pretty stupid way of servicing a nation's need to produce, consume and trade. It results in the evils of inflation, unemployment, decline of services, trading war, and finally, shooting-wars. Using interest rates as a means to control the problems of a nation's economy is futile, as these problems were created by interest in the first place. Only when a government creates its own money supply free of charge to the nation to facilitate production, consumption and trade, instead of authorizing private banks to create the nation's money and then holding the nation at ransom by breaking its back under the ensuing interest debt, only when we get back to a system where the usurer is not being rewarded for taking advantage of others' difficulties, will we achieve real prosperity.

Islam, often laughed at for sticking to its principles and not "moving with the times", has never given in to the demands of the money-lenders to change its tough stance on interest. Naturally, Islam has increasingly been attacked by the financial interests behind today's media and politics. Looking at the evidence with an open mind, however, it should not take you long to realize that Islam makes sense, and interest doesn't.