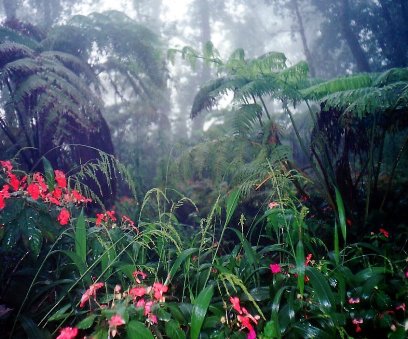 "….is the likeness of a garden on a height; heavy rain falls on it and it doubles its yield of harvest. And if it does not receive heavy rain, light rain suffices it..."  (Surat Al-Baqarah (The Cow): 265)

This verse mentions the scientific truth that an orchard on a flat surface, which is more elevated than what surrounds it, if subjected to heavy rain, will bear twice the amount of fruit.  This is because the likelihood of it being flooded with heavy rain is non-existent as the water quickly drains away from the soil after it has taken what it requires; this is as it is elevated above the valleys surrounding it. If, however, it does not receive heavy rain but light moisture (dew or light drizzles of rain) it is sufficient to water the plants and to produce plentiful fruit.

The point here is that such a garden on a height, thrives, flourishes, bears fruit and produces generously whether or not it receives heavy rain.

Surat Al-Baqarah describes those who spend for the sake of Allah and who are righteous. Allah makes what they have spent for Him in His cause thrive and grow (irrespective of whether the amount spent is large or small); the rewards of spending for the sake of Allah are compared to the produce of the garden on a height thrives and grows whether or not it receives heavy rain.

Each of the above mentioned scientific matters requires separate analysis; therefore, I will only focus my analysis in this article on the last point concerning the description of the garden on a height.  Before starting, we shall have a quick look at the interpretation of this noble verse by old and contemporary scholars.

Concerning the interpretation of the following verse that can be translated as,* “And the likeness of those who spend their wealth seeking Allah’s Pleasure while they in their ownselves are sure and certain that Allah will reward them (for their spending in His Cause), is the likeness of a garden on a height; heavy rain falls on it and it doubles its yield of harvest. And if it does not receive heavy rain, light rain suffices it. And Allah is All-Seer (knows well) of what you do.”*

Ibn-Kathir said, “This is the likeness of the believers, who spend their wealth seeking to please Allah by doing so. * “…and to strengthen their souls …” *They know for a certainty that Allah will reward them most generously for spending in His cause.

Al-Sha’abi explained* “…and to strengthen their souls…”* means that they do this out of true faith and absolute certainty.

All the scholars agree that *“…is the likeness of a garden on a height…”* means a place that is elevated from the ground; Ibn Abbas and Ad-dahak add that rivers flow through this garden. *“…Heavy rain falls on it and it doubles its yield of harvest…”* means it bears twice the amount of fruit as compared to other gardens, if it receives heavy rain.

The scientific implications of the noble verse:
It is an obvious fact that the earth’s surface is not completely flat.  It ranges from high lofty summits to low lying mountain ranges to the level plains that stretch to reach an altitude slightly above sea level.

Between the lofty summits and the leveled plains, we find heights and hills with different altitudes until we reach the plains, then we find continental depressions and sea and ocean trenches.

The reason why the topography of earth is variable is because of the different chemical and mineral composition of the rocks forming it and consequently the difference in the density of these rocks.  This is because the earth’s solid layer (earth’s crust) floats on a layer of semi-molten materials, which is called the weak zone (Asthenosphere) in the earth’s layers. This floatation is governed by the laws and principles. (For example buoyancy principle, just as an iceberg that is less dense than water floats in the ocean).

The deepest point on the ocean floor of the earth is the Challenger Deep in the Mariana Trench in the Pacific Ocean; its depth is a little over eleven km whereas the average depth of ocean floors is about four km (3729 to 4500 m) below sea level.

The height best suited for a garden that was given as an example in the verse under analysis is wondrous, since this is the best environment known to us for the growth of fruit trees and others trees that have produce such as olive trees, almond trees, pine trees and others.  This is because the environment of heights is characterized by mild weather, abundant water, a greater chance of being exposed to sunshine, rainfall, humidity, wind movement and to air renewal around it.  Therefore it is the most suited environment for the growth of trees in general and of fruit trees in particular.

Heights are features of the earth’s surface that are leveled and elevated above sea level by an average altitude ranging from 300 to 600 m.  Their altitudes are lower than that of mountains and higher than that of hills.  Consequently, rain water never drowns heights, no matter how strong the rainfall is.  That is because the rain water is pushed ever downward by the force of gravity to the surrounding areas that are lower than the height.  That is after its soil and rocks had been saturated with the required amount of water, which both cools and refreshes them and is stored in them.  Controlling the amount of stored water helps plants perform their vital activities efficiently without drowning or dehydration.  Dehydration kills the plants and drowning them in water or having an increase in the water storage in the rocks and soil would result in the decay, rotting and decomposition of the roots which would also kill the plants.

When heavy rain falls on a height, both its soil and rocks and the plants growing on it take their required intake of water, while excess water flows over to the lower surrounding areas till it reaches the valleys and the plains.  The controlled amount of water stored in the soil and rocks of the height helps the roots of plants in general and of trees in particular to extend deeper into the soil and rocks.  This multiplies the amounts of elements and compounds that become available for the roots to absorb, along with the nutritional sap they extract from the ground.  The extended roots also help fix the plants in the ground and make them resistant to strong wind and other environmental changes.

One of the advantages of the environment of heights is that if it receives heavy rain, it doubles its produce and if the humidity decreases and only drizzle or dew are available as moisture, it still bears plenty of fruit. This is because plants growing on heights are able to benefit from the rain water whatever the quantity they receive, as well as from the dew that condenses at higher rates than in plains or in closed valleys, particularly in dry regions.

Fruit trees and others trees such as olive, almond, and pine trees bear more fruit at heights that are above sea level than on level plains and closed valleys because if heavy rain falls on the height, the excess water quickly flows away from it after the garden has taken its water requirements.  It therefore benefits it and does not harm it in any way.  The garden therefore bears double the amount of fruit.  Nevertheless, when the garden does not receive heavy rain then the drizzle or dew condensing around it is sufficient to provide it with its water requirements, so it continues to live and bear fruit by the will of Allah.

The verse thus likens those who spend their wealth, seeking Allah’s pleasure and to strengthen their souls (whatever their material ability) to a fertile garden with fruitful trees growing on an elevated height in favorable environmental conditions that have provided the garden with all the means for growth and a very generous production of fruit when it receives heavy rain, moreover, still a generous production of fruit if it receives light rain.  The continuous production of this garden does not stop under any circumstance, similarly believers spend in the cause of Allah driven by their faith in Allah (SWT) and their firm belief that He is the Sustainer and that He is the Powerful and the Strong.  They therefore spend in His cause whether their financial ability is strong or weak. They spend seeking only His pleasure and the strengthening of their souls, since one of the ways to train the human soul is through spending money in the cause of Allah, and in this respect Allah (SWT) says what can be translated as, “And the likeness of those who spend their wealth seeking Allah’s Pleasure while they in their ownselves are sure and certain that Allah will reward them (for their spending in His Cause), is the likeness of a garden on a height; heavy rain falls on it and it doubles its yield of harvest. And if it does not receive heavy rain, light rain suffices it. And Allah is All-Seer (knows well) of what you do.”*

This verse points clearly to the preference of growing fruit trees in general on heights, which are flat elevated grounds, lower than mountains and higher than hills, ranging in altitude between 300 and 600 m above sea level.  This is a scientific fact that has been proven by experiments over successive decades.  This scientific fact is present in the Qur’an which was revealed over 1400 years ago to an illiterate prophet (PBUH) in a nation whose large majority were illiterate and living in a dry desert with no knowledge of gardens or fruit trees except for palm or some vines in very limited areas of it.  This Qur’anic description therefore bears witness that these are the words of Allah, the Creator, who has revealed it with His knowledge to His last prophet (PBUH).  Since the Qur’an is the last message, Allah (SWT) has undertaken to guard it in the same language of its revelation (Arabic).  Therefore, He has protected it word for word, letter for letter, from any addition or omission or alteration or change, for over 14 centuries and until the Day of Judgment, as He has promised what can be translated as,* “Verily, it is We Who have sent down the Dhikr (i.e. the Qur’an) and surely, We will guard it (from corruption)”*