Quran, the Miraculous Book calls our attention to the multifarious phenomena of nature occurring around us. It keeps on diverting the attention of its reader from the day its revelation started to Prophet Muhammad (Peace be Upon Him) till present and future generations to the search for existence of God. It picks up examples and observations we have in our close environment.

Here to quote one example for people who would know God from the phenomena of combustion and fire we kindle. The Quran reads and claims as;

Attention of the reader is diverted to the phenomena of fire burning in relation to a tree with a question that who created its tree that produce fire. What is the use of the word ‘tree’ Quran relates with the fire? Why not Quran choose the word ‘wood’ because fire burns dry wood as we observe in our daily life. What is the relation of tree with a fire to occur? Simpler, for a 7th century reader is that fire burns dry wood and that is our common observation too. But a very close reading of the passage would mean something different for a person who is more specialized in science and would seek the existence of God in his/ her scientific discoveries.

He/she would put the question why does Quran not explain the exact process of fire if it has taken it as something that would guide mankind to the existence of God. What all science knows is neither tree nor wood but ‘Oxygen’ that is released by plants during photosynthesis which means ''putting together with light.'' The best known form of photosynthesis is the one carried out by higher plants and algae, and some cyanobacteria responsible for a major part of photosynthesis in oceans. All green plants on the surface of earth have green coloring chlorophyll which contains chloroplast in them. Chlorophyll absorbs the sunlight and combines carbon dioxide and water in a process called photosynthesis. The end products of this photosynthesis are carbohydrate (sugar) and oxygen (Figure Photosynthesis).

The carbohydrate or glucose which plants produce is utilized by the plants for making starch, fats, and proteins. The second product of this process is oxygen. All oxygen we have in the environment for respiration and combustion comes from this process of photosynthesis. And all this what science has found is correct.He/ she then would say ‘what is God and how would I perceive His existence if I were to take this example of fire?

The Quran answers this question in a more concise manner and shows its reader to know GOD from your scientific discoveries and read the verse below;

Know that “God is One Who produces for you fire out of the green tree, when behold! You kindle therewith”. (36:80).

"And Allah is one Who produces for you fire out of the green tree, then Behold? you kindle there with". 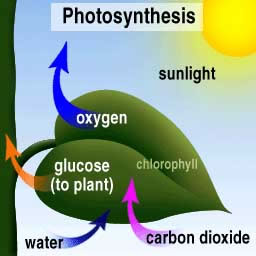 More special in the verse above is the word ‘green trees’ which has challenged the 7th century reader to contemplate and as an answer for the 21st or later century readers. The second point that needs more attention is the Arabic word ‘Min’ meaning “from” or “out of”.What is that which the green trees produce for burning through which we kindle our fire? Is it not explaining the end process of photosynthesis in green trees with which we burn our fire? (Oxygen as one of the end product of photosynthesis is a common knowledge for today’s man but for a reader of 7th century, the phenomenon was yet to be discovered).

It is up to you the men of Science and knowledge. What name you choose for it. You call it element of life, fire or "Oxygen". It is the property Almighty Allah has put in green trees for you as a sign and a lesson to understand God. If there were no green trees, there would have been no oxygen and no combustion. Nomadic people of desert had no knowledge of oxygen. All they knew was their observation of burning, either it was dry wood or a by-product of a green tree such as coal or oil. Oxygen was not known to them but they were challenged with the word ‘fire’ from green tree and were asked to uncover the knowledge that would lead you to the belief of existence of God after all their discoveries submit to the power of God who put such properties in green trees.

We notice here two remarkable features of the Quran. The first feature is that it expresses scientific truths that will be verified centuries later. The second feature is that the Quran expresses those truths using terms and expressions that would avoid confusing its first readers in the 7th century. The 7th century reader easily relates it to the image of fire from a tree and the 21st century scientist can easily interpret the word ‘fire from green trees’ as Oxygen.

Thus Quran fulfills the curiosity and mental capabilities of both 7th and succeeding century readers.

In the last message, the Prophet Muhammad (Peace be Upon Him) said, "All those who listen to me shall pass on my words to others and those to others, again; and may the last ones understand my words better than those who listen to me directly”. In the preceding verses from the Holy Quran we can observe this fact that the words of Prophet Muhammad (Peace be Upon Him) were correct. The Quran revealed to him is the last book and has the miraculous capacity of answering questions of all ages present and future and that Muhammad (Peace be Upon Him) was chosen as the last prophet of God who would fulfill this responsibility of prophecy to the present and future generations as well. Indeed Quran is for all ages, and all kinds of people. It is a source of knowledge. It provides hints to humanity for contemplation and knowing about the Creator.