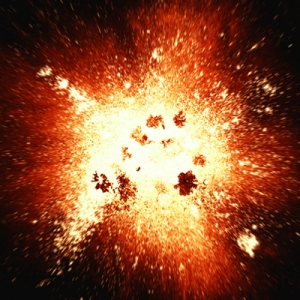 Where Did Everything Come From?

What is the proof?

Islam tells us Allah is both The Creator & The Evolver, of all that exits. We know Allah did not evolve us from monkeys, and we know all things are from Allah. Please share this information with those who deny the existence of God. They need it.

There is a popular theory referred to as the 'Big Bang' theory. It tries to explain the existence of the universe in an evolutionary manner having an initial beginning with an immense explosion of some gases or solid mass. Some say there first was a void or ’nothingness’, or perhaps, some gases which exploded then from this everything in the universe simply began to evolve to the stage that we see now. There has never really been any solid evidence for this idea of 'something out of nothing' concept. Nor for that matter, the evolutionary theory itself.

We would like to explore the idea of creation from a purely logical standpoint using simple terminology without religious hype, emotional pre-convictions or superstitions.

What if someone called a 'scientist' tells you his 'theory' of how cars are made is like this:

A salvage yard on the south side of town blows up and all the metal pieces fly into the air and fall back down in one place forming a brand new Chevrolet Caprice automobile.. with no left over parts.. and the motor is running..

Or what if his theory for how a chair is made is:

An explosion occurs in a forest and the trees go flying into the air and then suddenly they combine with some flying cloth to make a beautiful chair... and then it lands in a furniture showroom complete with matching table and lamp...

He further explains that:

An earthquake in California's 'Silicon Valley' causes the computer chips and circuit boards and other various parts to fall out of their boxes and off of their shelves and just come in place together as they are rolling around on the floor and form the most advanced technical computers existing on the earth?...

Or what of his 'Medicine Theory'? He now claims that:

A gas leak in a pharmacy warehouse causes a terrific explosion. All the different chemicals and substances just smash into each other in exactly the correct amounts to produce a miracle drug which cures everything form cancer to heart and liver disease, old age and warts?...

It is all in one formula, packaged in the bottles with labels and ready to sell with no mess left on the floor?...

Now after all this exploding and excitement this 'scientist' tells you of a great place to relax and have something to eat. It is his favorite place and he calls it: "Burger Blast"!

You just go in and sit down and suddenly a 'blast' from the kitchen occurs and immediately a burger lands right in front of you with all the trimmings.. just the way you like it complete with fries, a drink and even your favorite dessert?...

No one works at "Burger Blast", it just runs itself, automatically cleaning itself and as you leave it scans your billfold for a valid credit card and charges your bank account for what you have eaten?...

Now the question is: "Are you really going to accept any of this as 'fact'?"

We wouldn't believe a new car is made from flying junk; chairs don't fall down from exploding trees; earthquakes do not produce computers and blasting burgers don't rain down on us from above.

Question: So how come we don't challenge a theory of something coming from nothing and then colliding in the cosmos to make the universe? Is it because of its tremendous magnitude that we have so little comprehension about it, that we are willing to accept any theory from a few telescope 'peeping Toms' to tell us that it came from 'nothingness'? Or just some gases colliding and then... 'Poof'!? Instant Universe? How?

Let us now come to our main subject:

We can turn our attention to the earth and the heavens and make observations on our own without a 'genius' scientist telling us what we are seeing. And then the idea that nothing is sustaining the heavens and the earth! - 'It just runs itself'? How?

Think about the stars, the sun, the moon and the countless solar systems and galaxies in the universe.

Who or What created them in the first place?

They continue to function and move with the utmost precision and accuracy.
Who does this? Who keeps them gliding along on their courses and orbits preordained for them?

Look closer to the heaven surrounding the earth. We call it the 'sky'. Notice the clouds? What are they?

Let us now bring our gaze a bit closer to earth. Consider the mountains and their majesty. Is there anything about these massive formations that may give us a clue as to the origin of creation?

What about the water covering the earth? Is there another clue hiding beneath the seas?

Water covers so much of the earth and even mixes with the land in rivers and streams. Yet is there something keeping it from mixing with itself? What is contained in this mystery of separation of waters?

What about us? Are we are part of creation? How did we begin? What develops us and causes us to live and die? How are we sustained?

Think about the humans. How did we all get here? What is the nature of mankind? What causes us to act as we do? Are we ungrateful to the One who created us and sustains us? What is this clue? Think about yourself. Did you create yourself?

Who or What created all this? Who is sustaining everything? How do organisms reproduce themselves? How can a tree grow up out of a seed?