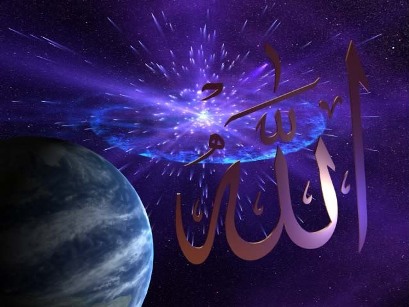 Allah, the Creator of everything, is the sole possessor of all beings.

It is Allah Who heaps up the heavy clouds, heats and brightens the Earth, varies the direction of the winds, holds birds suspended up in the sky, splits the seed, makes a man's heart beat, ordains photosynthesis in plants, and keeps planets in their separate orbits.

People generally surmise that such phenomena occur according to "the laws of physics," "gravity," "aerodynamics," or other physical factors; however, there is one significant truth these people ignore: all such physical laws were created by Allah, the only possessor of power in the universe.

Allah rules all the systems at any moment in the universe, regardless of whether we are aware of them, or if we are asleep, sitting, walking. Each of the myriad of processes in the universe, all essential to our existence, is under Allah's control. Even our ability to just take a small step forward depends on Allah's creation in countless minute details, including Earth's force of gravity, the structure of the human skeleton, the nervous system and muscular system, the brain, the heart, and even the rotation speed of the Earth.

Attributing the existence of the world and of the entire universe to sheer coincidence is complete delusion. The exquisite order of the Earth and the universe completely contradicts the possibility of formation through coincidence, and is, rather, a clear sign of Allah's infinite might.

For instance, the Earth's orbit around the Sun deviates only 2.8 mm in every 29 km from the right path. If this deviation were 0.3 mm longer or shorter, then living beings all over the Earth would either freeze or be scorched. While it is virtually impossible for even a marble to revolve in the same orbit without any deviation, the Earth accomplishes such a course despite its gigantic mass:

In effect, the splendid order in the universe is maintained as a result of fantastic systems that depend on highly delicate equilibriums.

Some people hold the perverted belief that Allah "created everything and then left them on their own." However, any event, taking place in any area of the universe, occurs solely by Allah's Will, and under His control:

“Do you not know that Allah knows everything in heaven and Earth? That is in a Book. That is easy for Allah.” (Al-Hajj, 22: 70)

It is very important to grasp this fact for someone who strives to come near to Allah. The prayer of Prophet Muhammad, peace be upon him, quoted below is a very good example of this:

You are the Maintainer of the Heaven and the Earth and whatever is in them. All the Praises are for You;

O Allah! I surrender myself to You, and I believe in You and I depend upon You, and I repent to You and with You (Your evidences) I stand against my opponents, and to you I leave the judgment (for those who refuse my message).

O Allah! Forgive me my sins that I did in the past or will do in the future, and also the sins I did in secret or in public. You are my only God (Whom I worship) and there is no other God for me (i.e. I worship none but You).” (Al-Bukhari)

Elaborate processes taking place in the bodies of living things are impressive examples that help us to grasp Allah's might. For instance, at every moment, your kidneys filter your blood and extricate those harmful molecules to be excreted from the body.

This screening and elimination process, which can be carried out by a single kidney cell, can only be accomplished by a giant haemodialyser (artificial kidney). A haemodialyser was consciously designed by scientists. A kidney, however, does not sense, or have a decision-making centre, nor the faculty of thought. In other words, an unconscious kidney cell can accomplish tasks that otherwise demand an elaborate thinking process.

It is possible to encounter millions of such examples in living beings. Molecules, composed of unconscious matter, perform tasks so remarkable they would otherwise suggest consciousness. The consciousness apparent in these cases though is, of course, of Allah's infinite wisdom and knowledge. It is Allah Who created the kidney cells, as well as the molecules discussed, and Who orders them to accomplish their respective tasks. In the Qur'an, Allah informs us that He constantly sends down "commands" to the beings He created:

“It is Allah Who created the seven heavens and of the Earth the same number, the Command descending down through all of them, so that you might know that Allah has power over all things and that Allah encompasses all things in His knowledge.” (At-Talaq, 65: 12)

Clearly, Allah, Who created everything in the universe, is surely able to bring the dead to life:

“Do they not see that Allah-He Who created the heavens and the Earth and was not wearied by creating them-has the power to bring the dead to life? Yes indeed! He has power over all things.” (Al-Ahqaf, 46: 33)