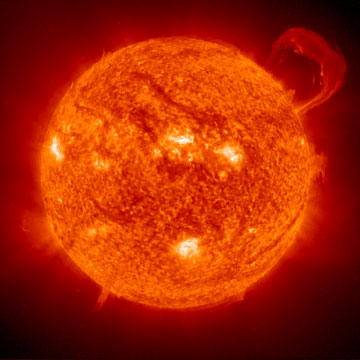 Ibn 'Abbas (R.A.) narrated that the Prophet (PBUH) was asked:

"Where does the sun set, and where does it rise from? The Messenger of Allah (PBUH) answered, "It is going in a (nonstop) regular motion; it does not cease or disappear. It sets in one place and rises in another, and sets in another place and rises elsewhere and so on. So, some people would say the sun has set and others would say it has just risen (at the same moment)."

This hadith refers to the fact that there is a continuous alternate sunrise and sunset on earth. This could only take place if the earth is spherical or spheroid, and is, at the same time, continuously rotating round its axis facing the sun. This motion pattern leads to the continuous alternation of day and night on its surface, until life on earth comes to an end, i.e. until the Day of Resurrection.

One of the most prominent phenomena linked to this spherical shape of the earth, is that there are different places of sunrise and sunset for different zones of the globe. Each of the sun, the moon and other celestial bodies, sets somewhere in the globe and rises in another. They are all rotating, regularly, in fixed orbits, which they never leave or depart from. Truly, Allah says:

The Messenger of Allah (PBUH) talked about all these cosmic facts in such accurate scientific style at a period of time when people thought that the earth was flat and stationary. This is definitely one of the signs, which testifies to the truthfulness of the message of Muhammad (PBUH). For sure, no one in the Arabian Peninsula at the time of revelation, and for centuries to follow realized the fact that the earth is spherical and that it rotates around its axis facing the sun. Needless to say that at that time, no one was able to perceive the real or the apparent motion of the moon, the sun and other celestial bodies, as Arabia was but a simple and primitive environment.

The Glorious Qur'an refers to the spherical shape of the earth and its axial rotating, and to its revolving in its orbit around the sun. The Qur'an refers to these issues in many verses but in a subtle implicit way which may not astound the Bedouins in the desert of the Arabian Peninsula at the time of revelation, but still keeps the scientific fact in context.

Among these verses are the following:

(He has created the heavens and the earth with truth. He makes the night to go in the day and makes the day to go in the night. And He has subjected the sun and the moon. Each running (on a fixed course) for an appointed term. Verily, He is the All-Mighty, the oft-Forgiving.) (Surat Az-Zumar (The Groups):5)

1. The Glorious Qur'an also confirms in more than one verse that the earth is "spread out" without ending at an edge. This could only be possible if the earth is spherical or spheroid, as the spherical shape is the only shape, which could endlessly be spread out or extended. For example, Allah the Almighty says:

(And it is He Who spread out the earth, and placed therein firm mountains and rivers…) (Surat Ar-Ra'd (The Thunder): 3)

2. The same fact is also assured when the Qur'an refers to the East and the West in different forms. First in the singular, then in the dual form by indicating that there are "Two Easts and Two Wests", and in the plural form by referring to "Easts and Wests". This also emphasizes the fact that the earth is spherical and that it rotates round its axis while facing the sun. These verses also emphasize the fact that the Earth is tilted on its axis and that it does not orbit the sun in a perfect circle.

3. The fact that the earth is spherical in shape is also emphasized by the verses referring to the alternation of night and day. The Glorious Qur'an indicates how Allah makes the 'Night overlap (Kawwar) the Day and the Day overlap the Night' (Surat Az-Zumar: 5). Among the verses that indicate the spherical shape of the earth is the one referring to the passing away of the mountains in the same way the clouds do:

(And you will see the mountains and think them solid, but they shall pass away as the passing away of the clouds…) (Surat An-Naml (The Ants):88)

All of the above facts mentioned in the Qur'an have urged Muslims, at the time of the Abbasid Caliph al-Ma'mun, to measure the circumference of the earth very accurately. Their motive was the firm belief that the earth is spherical and that it rotates around its axis facing the sun. Moreover, the Muslim scholar and scientist "al-Bayyruni" divided the earth into lines of longitude and latitude, in his book:" Tahdid Nihayat al-Amakin li Tas-hih Masafat al-Masakin," which he wrote in 416 A.H (about 1040 A.C.).

The source of all this knowledge is the illuminating signs that are mentioned in the Qur'an and Sunnah of the Prophet (PBUH), and each of them testifies to the truthfulness and the Divine nature of the Message of the last of the Prophets and Messengers. This accurate scientific knowledge could not be obtained except for a Divine Revelation.