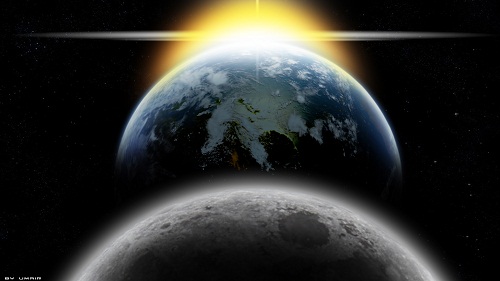 The energy of the sun (universal atomic pile): The energy of the sun is generated by the burning of hydrogen, which is the main constituent of the sun that transforms it into helium deep within, where there is very high density, pressure, and temperatures reaching 15,000,000°. This leads to a nuclear reaction and fusion of four hydrogen atoms to make one helium atom. The leftover energy from this reaction is released in the form of electromagnetic energy divided into short wave rays, infrared rays, and ultraviolet rays.
This means that the sun obtains its energy from within through natural nuclear reaction under very high pressure, heat, and density as if it is a mega atomic pile made to provide earth with light, warmth, and energy.

The sun is considered a star and is a luminous celestial body, whereas the moon is a planet; a dark celestial body that reflects the light it receives from stars and the sun as do all the other natural satellites of the planets (the moons).

More than fourteen centuries ago, the Ever-Glorious Qur'an indicated the difference between stars and planets exemplified in the difference between the sun and the moon.
Modern astronomers only discovered this fact recently after the telescope was invented and after applying photometric and spectrogram researches on stars and planets.
Stars are luminous celestial bodies whereas planets are dark celestial bodies that reflect the light received from stars and the sun as do all other natural satellites of the planets and (moons).

The sun is a mega atomic pile swimming very fast in space and has many various forms of light, heat, and energy. It is not just a bright disk; rather it is like a shining lamp, whereas the moon is a planet that reflects the light of the sun to lighten the night on earth.

This fact was described in these two honorable verses fourteen centuries ago, then we must ask ourselves, who told Prophet Muhammad r about it but Allah, the Most High!