In the holy Quran this movement is described as follows: (And he is the one who created the night, daylight, sun and the moon, all are swimming in an orbit). (The Profits: 33).

From my point of view, I think God used the names of the sun, moon, night, and daylight as symbols of the four heavenly cosmic creatures:
Night (darkness): nowdays symbolizes dark matter, or what is sometimes called the cosmic fluid, or fabric of ths cosmos. Dark matter did not glow by the passage of light. Daylight: symbolizes the gases of the earth atmosphere, or other gases in the universe that glow by the passage of light, Sun: symbolizes the stars and the sources of energy and cosmic tremendous heat & electromagnetic radiation. Moon: a symbol of the cold rocky objects in the universe.

So night, daylight, sun, and moon are only a set of nearby symbols, that are close to us in the universe, and are having masses, energy, radiation…etc.

The idea behind all of this, is that if God is telling us: (All are swimming in an orbit). This means that the natural mechanical movement of every thing in the universe, either it is radiation, dark matter, energy or solid masses, it is swimming, or what we call in physics wavy motion, this agrees with the assumption of the Austrian physicist Erwin Rudolf Schrödinger which suggests that (Every point in the universe has a wave function). 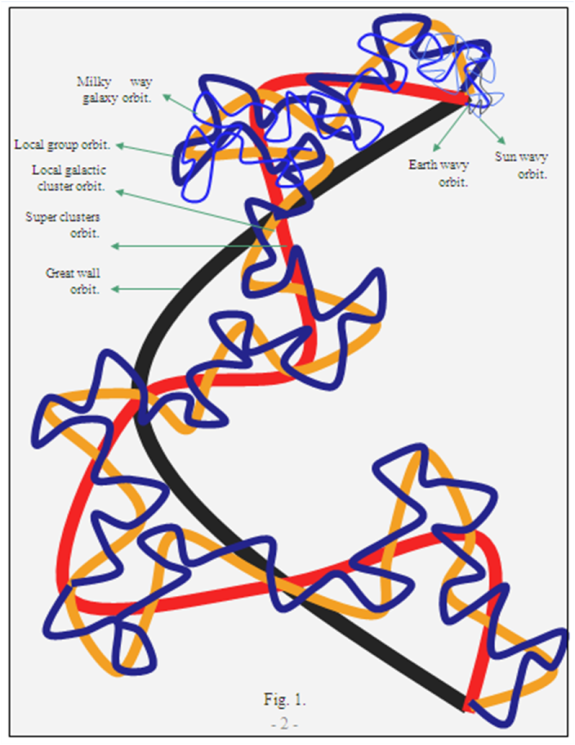 When I reached these results, and that question, and gathered it with the  the description of the heavens, that it has a property of knots (And the heaveness that have the knots) (Adh-Dhariyat: 7), while knots means in our language (Arabic) the wavy ways on tissue, water or sand, I expected to find the combinations of waves from the small over the bigger over the bigger, on the sea water, fig. 2, sand fig. 3., and fig. 4. Actually what I found was the same that I drew for the accumulated wavy orbits of swimming cosmic celestial objects. If I want to draw the maps of tracks of air on tissues, or water,  or sand accumulated waves, it will be the same of that drawn on fig.1.

When I went to the sea, the picture was more clear, the smaller waves are built over the bigger ones, in the same way it moves with it and swim over it, the pictures that I took myself will be more clear than the description. Note in the figures that the small waves have its own small speed, at the same time, it is moving and carried with the bigger ones, at its higher speeds. 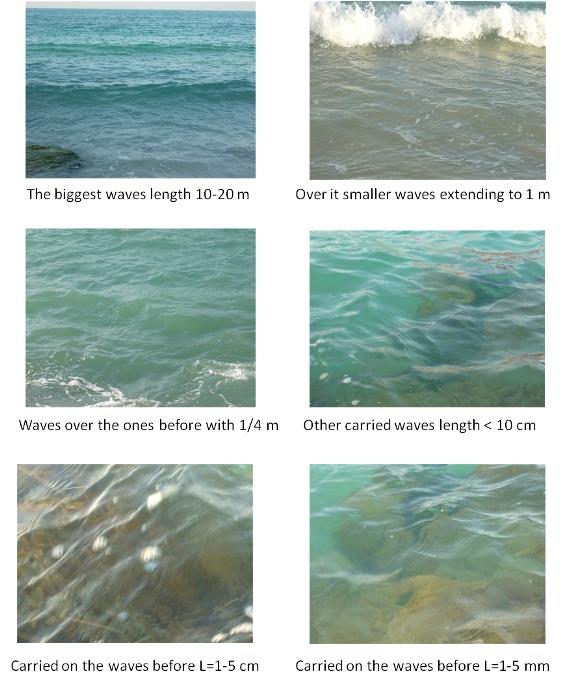 When I visit the desert in UAE; I got the following beautiful photos, which shows also the wavy mountains of sand carrying wavy hills of sand… or vice versa, sand waves built over each other from the smallest to the biggest, same as the celestial bodies and sea orbits or waves. 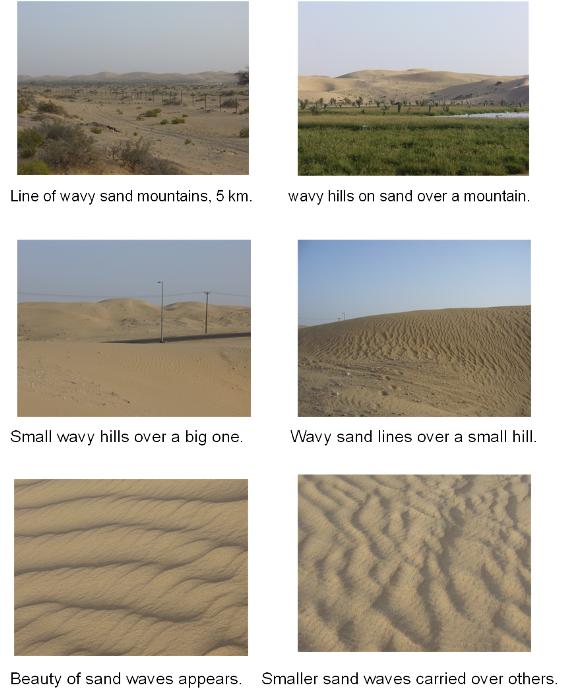 The children maintain genetic characteristics of their ancestors, in the figure, small waves carried in the hands of parents, the smallest waves insist on maintaining the same elegant family shape. 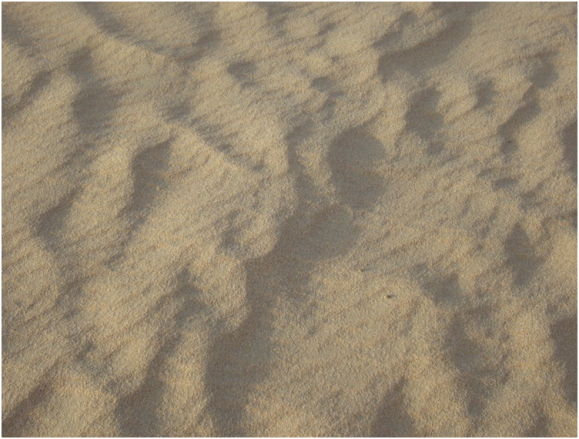 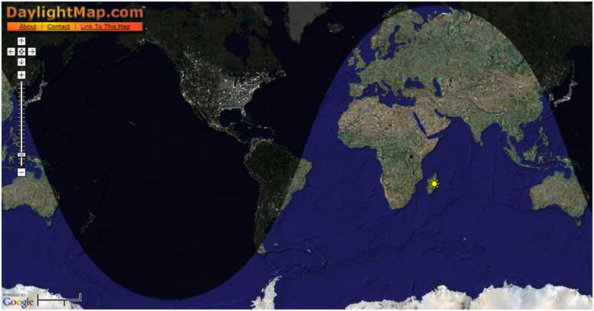 Daylight and night are symbols of time, here in the photo as the Quran mentioned, they are moving in a wavy motion over the spherical earth, indicating that time is a wave; in my book (New Principles of Space- Time travel) I managed depending on this conclusions, to reach many great results about space-time travel.

Based on this verse which was said before more than 1,400 years, understanding that daylight and night are wavy over the earth, and as these are symbols of time, as an inventor; I tried to invent a clock that show the earth on the screen, while the wavy daylight and night film is passing over it with time, in another way, showing relative to time, which places on the earth have daylight, and which have daynight, but with more researches, I found that the American mechanical Engineer Jim Kilburg invented it and called it Geochron (Fig. 6).

Ronald Reagan gave one clock of it to Mikail Gorbachev. Former U.N. Secretary General Boutros Boutros-Ghali was given one from the indigenous people of the world. The Geochron has even appeared in popular movies such as Hunt for Red OctoberandClear and Present Danger. NASA still uses several to track night and day during orbital space flights.

When the President Ronald Reagan gave Mikail Gorbachev a Geochron he said to him: that this is “an example of American ingenuity.”

But the president does not know that this clock which gives an example of American ingenuity, is working depending on a scientific principle that was mentioned as part of a verse in the Holy Quran before more than 1400 years.

Furthernore, if the verse indicated that everything is swimming in an orbit, we can see how science draws the orbit of the sun around the center of our galaxy to be wavy as in fig. 7, while fig. 8 shows the wavy shadow of the moon on the earth, fig. 9 shows the wavy track of a meteoroid near the earth, fig. 10 shows an amazing wavy track of a meteoroid in the space, fig. 11 shows the great wavy sand mountains in the Empty Quarter in the Arabic Semi-Island, while Fig. 10 shows how the tracks or orbits of the sun, moon.. are drawn in the most famous astronmical scientific magazine (Astronomy), it is clearly proving that the orbits of the celestial bodies which are all moving relative to each other is wavy, but until now I couldnot reach an explaination why it is wavy, at the same time nobody drew the accumulated wavy orbits, these questions I expect I explained its answers in these two articles, while other related questions such as: How gravity works with wavy orbits? What is the relation between accumulated wavy orbits and higher dimensions?... and many others I tried to explain in my books (Universe Revealed More- Continueing Einsteins Revolution) and (New Principles of Space-Time travel). 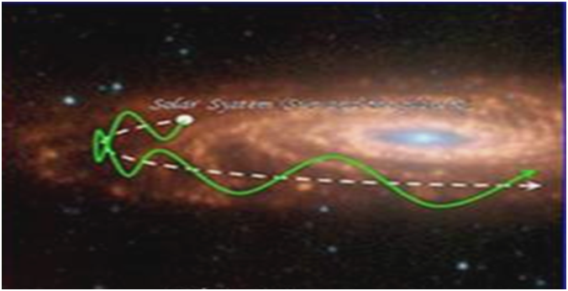 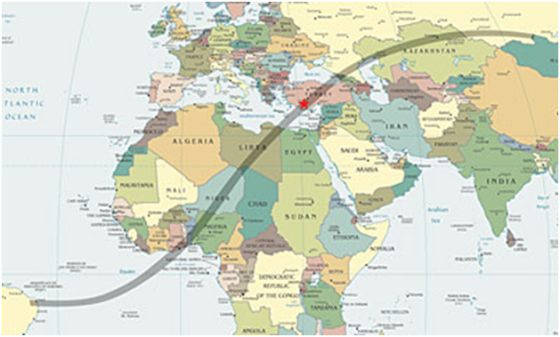 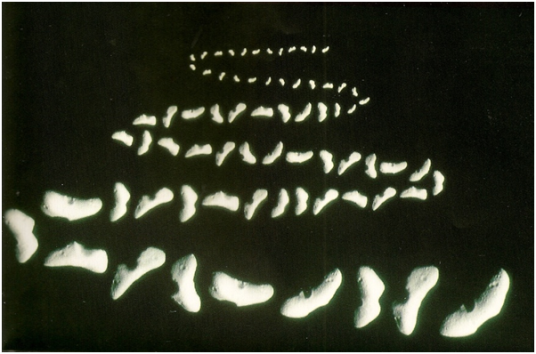 Figure showing a meteoroid track in space, though 21 days. 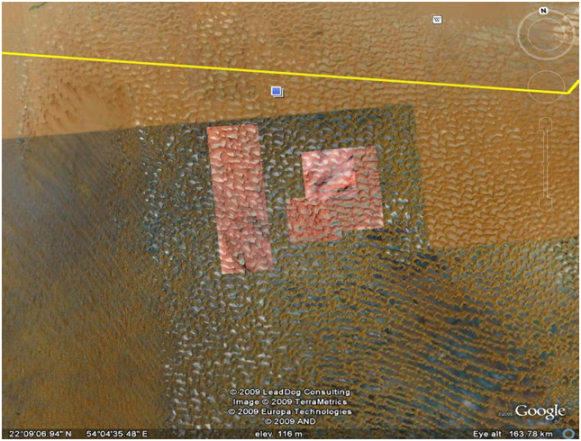 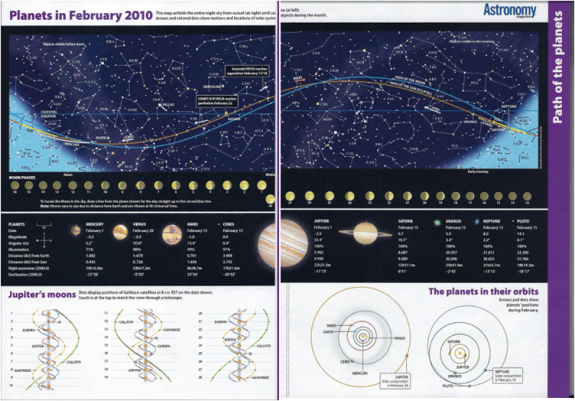 The monthly track (orbit, passage) of the sun and the moon through the celestial sphere which is published in the most famous astronomical magazine (ASTRONOMY)  is clearly wavy, furthermore it is clear that the moon wavy orbit is crossing the orbit of the sun, and waving around it, if we imagine a vedio movements of the tracks or orbits of the solar system members, through the space, for sure the picture will be for celestial bodies where all are swimming in an orbit.

The reader is free to evaluate and rate this article, using the rating pointer at the top of the article.

Email: This email address is being protected from spambots. You need JavaScript enabled to view it.