In this verse Allah describes the Sky that it has what is called in Arabic (Hobok), so what is the interpretation of this Arabic term? And how could it refer to the Cosmic web?

Commentators of the Glorious Quran and Hobok of the Sky

Arabic term mentioned in the verse Hobok of the Sky has various meanings so the commentators clarified these meanings in their interpretation of the verse. (Al-Kortoby, vol.17/18, and pp.22-23) they include:

·Hobok are the surface ripple in stagnant water resulted from the passing of quite air through water.

·Hobok are what you see in surface of the sand by the effect of light wind, which we now define as ripple marks.

·Hobok are the rippling of every thing even the uneven hair.

·Architecture with stars, galaxies and paths of stars.

The present translations of Quran into English use the last meaning of the (Hobok). But it is clear that the comprehensive meaning of this term is beyond this last meaning, however this one is also very accurate description of the sky reality.

In Yusuf Ali's Translation of Quran the verse is translated as

Hobok of the Sky and WMAP

The interpretation of the commentators of Hobok Al-samaa (since 700 years ago) is very similar to the characters of CMB (Cosmic Microwave Background) given by WMAP (2003-2008) which discovered that CMB are similar to ripples resulting from tossing pebbles in a pond. Scientists glimpse the universe's beginnings by studying the subtle ripples made by gravitational waves. Fortunately astronomers (Smoot and, Keay, 1993) and others used the same words used by the commentators to describe the "subtle ripples" detected nowadays in the sky (Smoot, G. et al.1977 and 1987).[1]

After the Big Bang there were density fluctuations appeared in the Cosmic Microwave Background (Dr. Smoot [Noble Prize 2006] called it Ripples). These ripples seeded the development of large structure as the galaxies of our universe. 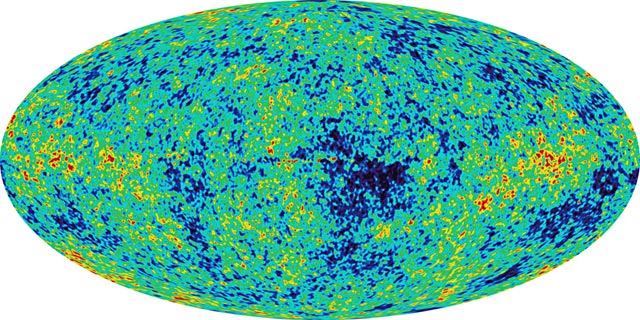 Hobok of the Sky & Cosmic architecture or cosmic web

Scientists believe that if one could see the structure of the larger universe. The universe will appear to be bound by invisible threads of dark matter from the Big Bang. LARGE-SCALE structure in the distribution of galaxies is thought to have evolved through gravitational instabilities from small density fluctuations in the (largely homogeneous) early Universe. This structure of galaxies consists of rich and poor clusters, connected by filaments and sheets, with regions largely devoid of galaxies (voids) in between. The universe appears as filaments of galaxies woven into the cosmic web.[2]

These ripples that converted in to filaments into web are well described by the Arabic term (Hobok). So the holy Quran from 1400 years preceded this scientific breakthrough in describing the universe.

Discovery of Al-Hobok and Nobel Prizes

Penzias and Wilson (1965) discovered the remnant afterglow from the big bang and were awarded the Nobel Prize in 1978 for their discovery, microwave receiver - 1965. WMAP is bringing the patterns into much better focus to unveil a wealth of information about the history and fate of the Universe, 2003 (Second Image). George Smoot and John Mather (NASA) won the 2006 Nobel Prize in Physics about researches of Al-Hobok (subtle ripples) and dark matter confirming the big bang.