The Glorious Qur’an is a Message from Allah to humanity. It was transmitted to us in a chain starting from the Almighty Himself (swt) to the angel Gabriel to the Prophet Muhammad (saas). This message was given to the Prophet (saas) in pieces over a period spanning approximately 23 years (610 CE to 632 CE).

Cosmology is the study of the Universe as a whole and it is the physical study of the origins and evolution of the Universe. Cosmology endeavors to use the scientific method to understand the origin, evolution and fate of our Universe. Like any field of science, cosmology involves the formation of theories or hypotheses about the universe which make specific predictions for phenomena that can be tested with observations. Depending on the outcome of the observations, the theories will need to be abandoned, revised or extended to accommodate the data. On the other hand, The Glorious Qur’an deals with facts of creation. Herein, the basic principles of cosmology, presented in The Glorious Qur’an, are manifested and the scientific views are discussed, starting with principle of Fatq-Al-ratq as a true name instead of the proposed name applied to the prevailing theory explaining the origin and evolution of our Universe, the so-called Big Bang Model. In this work, the author evaluates the most recent discoveries in the field of cosmology on the light of scientific signs mentioned in The Glorious Qur’an in the following items:

On the light of the scientific signs of The Glorious Qur’an, we can revise the theories dealing with the origin of the universe either by accommodation, revision or abandonment. For example, the prevailing theory known as the Big Bang requires modification on light of the verse No. 30 of Surat Alanbiaa, Where Allah says in The Glorious Qur’an:

The origin of creation is dealt on the light of this verse and the cosmological views are given in the following:

A- Scientific signs of the verse.

B- Explanation of Arabic term (Fatq-Al-ratq)

Three interpretations of the above mentioned verse were given before centuries by the commentators of TheGlorious Qur’an:

In the 1990s, there was an international competition to rename the BIG BANG with a more appropriate name, but no new name was selected. Really, this term should have been withdrawn in the 1980s with the development of the theory of cosmic 'inflation'. However, the term 'big bang' is still used, for two reasons: scientists yet know if the inflationary theory is true; and even if it is, the universe was still very hot just after inflation finished. It is surprise to know that the true name is the Fatq-Al-Ratq already mentioned in The Glorious Qur’an and it probably engulfs the big inflation

The Big Bang nomenclature is incorrect for many reasons:

First: There was no bang in the Big Bang. Astronomers have recaptured the sounds of the early Universe showing it was born not with a bang but a quiet whisper that became a dull roar. Mark Whittle of the University of Virginia analyzed the so-called background radiation (CMB) that was born 400,000 years after the Big Bang. Moreover, whittle reported that The Big Bang would have taken place in complete silence but as the universe expanded, sound waves would have been able to grow. The above mentioned author said: during the expansion there is a change in the frequencies of the sound waves that results in the characteristic sound of the Universe changing from a major third chord to a minor third. 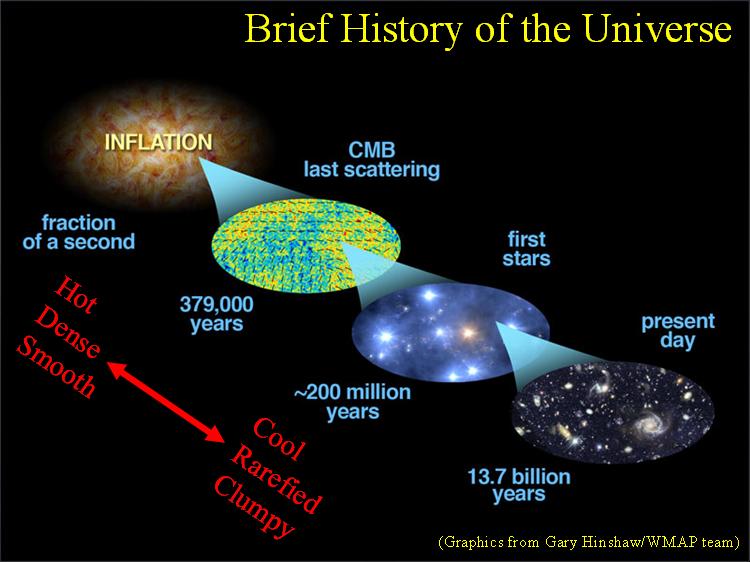 Third: The arrangement of events dominating the universe at early stage proved that the so called big bang is made by order which contradicts with the explosion suggested in the big bang.

Therefore, the possibility of description of the 3 minutes of the history of the universe proves that the unbelievers see Fatq- Alratq as mentioned in the Glorious Quran.

Fourth: If we know that Hubble made in 1929 the most important cosmological observation of the century. Then what are the evidences make Georges LeMaitre, a Belgian priest and mathematician, to propose that the expansion of the universe can be traced to an exceedingly dense ‘primeval atom. I think that LeMaitre may deduced such the expansion of the universe from the verse of The Glorious Qur’an when Allah says:

(With power and skill did we construct the firmament: for it is We Who create the vastness of space). (Quran 51:47)

Fifth: By measure Big Bang is wrong, Big Inflation is Wright: Big inflation followed quickly and directly Al-Ratq: The Inflation was a period of exponential expansion in the early universe probably at about t=10–24 seconds. Note the similarity between the word Fatq and the proposed Big Inflation. Suzanne Willis, professor, Northern Illinois University discussed the subject of parallel universe; She reported that the universes can split, according to widely accepted theories in two ways that we know of. The first of which, in the very early moments of the universe (just after the big bang), she believes that something called "inflation" occurred, whereby a small part of the existing universe underwent a huge expansion and became what we recognize as the universe today; other parts could have undergone similar expansions, giving rise to other universes.

The real "inflation" is mentioned as "Fatq –Al-ratq" in the verse: (Do not the Unbelievers see that the heavens and the earth were joined together (as one unit of creation) before we clove them asunder?), and the correct term to describe the birth of the universe is "Fatq –Al-ratq". 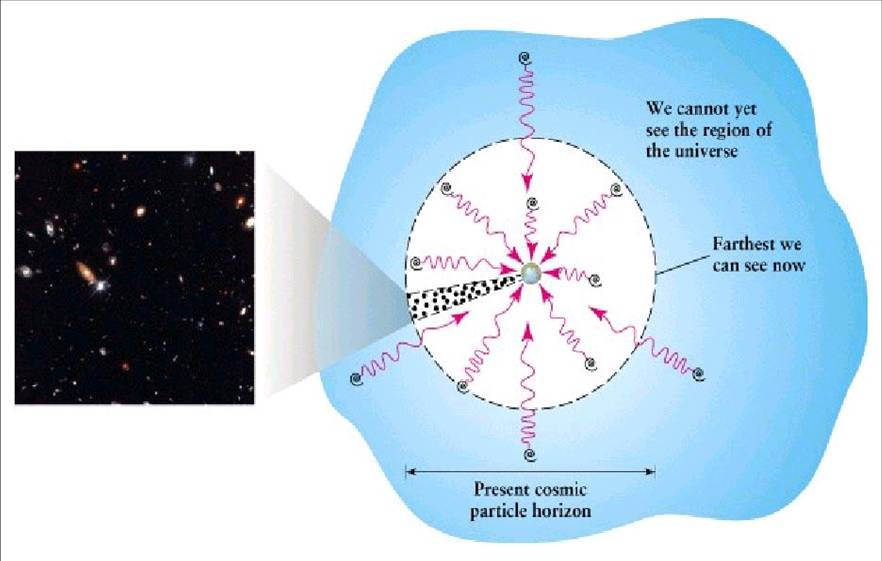 E- Consistent with creation in Holy Quran: According "Fatq-Al-ratq" story of origins" the development is as such:

By smashing together nuclei traveling at close to the speed of light, physicists at Large Hadron Collider (LHC) hope to create matter as dense and hot as existed in the early universe.

The accelerator was built to make a little big bang. Nowadays about 15000 people are prepare themselves to sea Fatq-Al-ratq. Let us listen to what mentioned since more than 1400 years in The Glorious Qur’an where Allah saying:

The unbelievers unfortunately say that there was no “before”. Time began at the Big Bang. Similarly, “what is outside the universe” is not a well-posed question. The universe encompasses all of space. Before the birth of heavens and earth there was Allah with His thrown". Al-Arsh" was standing on "water". Allah says:

(And He it is who has created the heavens and the earth in six Days and His Throne was on the water, that He might try you, which of you is the best in deeds. But if you were to say to them: "You shall indeed be raised up after death," those who disbelieve would be sure to say, "This is nothing but obvious magic) (Quran 11:7)

Some cosmologists say that it is beyond the realm of the Big Bang Model to say what gave rise to the Big Bang except we believe of creation. The creator is Allah "Fater". Allah says:

(All the praises and thanks are to Allâh, the (only) Originator (or the (only) Creator) of the heavens and the earth, Who made the angels messengers with wings, two or three or four. He increases in creation what He wills. Verily, Allâh is Able to do all things). (Quran 35:1)