Cosmic smoke is more accurate than cosmic dust according to the particles size.

ScienceDaily (July 24, 2003): Smoking Supernovae: Astronomers Claim Solution To A Mystery Of The Universe 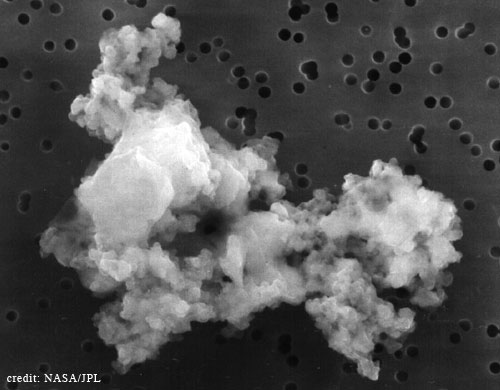 Astronomers from Cardiff University, in Wales, and the Royal Observatory, Edinburgh, Scotland, believe they have solved one of the long-standing mysteries of the Universe - the origins of cosmic dust.

In the latest issue of the science journal Nature, they explain how they have found that some supernovae, or exploding stars, belch out huge quantities of this dust - a discovery which suggests that supernovae were responsible for producing the first solid particles in the Universe.

Originally astronomers thought that dust was mostly made in the winds from cool, giant stars in the late stages of their lives.

Cosmic dust consists of tiny particles of solid material floating around in the space between the stars. It is not the same as house dust but more akin to cigarette smoke. It is responsible for blocking half of all the optical light given off by stars and galaxies. The presence of dust grains around young stars helps them to form and they are also the building blocks of planets.

This 'dusty' cloud has a silver lining, however. The dust converts the stolen starlight it absorbs into light at longer wavelengths. Astronomers can 'see' the dust 'shining' using special instruments which can detect light-waves in the far-infrared and sub-millimetre part of the electromagnetic spectrum (0.1-1mm).

One such camera is SCUBA, a UK-built instrument based at the James Clerk Maxwell Telescope in Hawaii. In recent years SCUBA has been revolutionising our understanding of galaxy formation, finding huge dusty galaxies and quasars at a time when the Universe was only 1/10 of its present age, long before the Earth formed.

"Dust has been swept under the cosmic carpet--for years astronomers have treated it as a nuisance because of the way it hides the light from the stars. Now studies have shown that there is dust right at the edge of the Universe in the earliest stars and galaxies, we realize that we are ignorant of even its basic origin," explained Dr Dunne.

The team of five astronomers from Cardiff University and the Royal Observatory Edinburgh used SCUBA to look for dust in the remains of a recent supernova called Cassiopeia A, which is some 11,000 light years from the Earth. This is the remnant of the explosion of a star some 30 times bigger than the Sun, which took place around 320 years ago.

The remnant consists of a cloud of as travelling out from the site of the explosion at very high speeds (10,000 kilometres per second). Although astronomers had been searching for dust in supernova remnants for decades, they had used instruments that could only detect dust that was quite warm.

"With SCUBA we can see dust which is very cold," said Dr Steve Eales, Reader in Astrophysics at Cardiff University. "This is because it operates at longer sub-millimetre wavelengths than the infra-red instruments used previously. In the same way that you can only see an iron poker glowing when it has been in the fire, you can only see dust with infra-red cameras when it is warmer than around 25 Kelvin, but SCUBA can see it when it is colder too."